TEHRAN - Iranian experts have succeeded in producing the world’s first vertical takeoff and landing (VTOL) drone, which will be unveiled in the near future.

This Iranian drone enjoys ultra-advanced technology and has been manufactured for the first time in the world, an Iranian expert in the research team in charge of building the drone, Abbas Jam, told Mehr news agency on Saturday.

He added that the drone would be tested on Saturday and would be unveiled during the 10-Day Dawn celebrations, which will begin on January 31, marking the 34th anniversary of the victory of the Islamic Revolution in Iran. He noted that the hushed drone does not require runways at all and can take off and land vertically.

Jam added that NASA has confirmed the manufacturing of this unmanned aerial vehicle and its information.
Iranian researchers have recently designed and built a new radar-evading drone, named Liko, with the capacity of carrying 100 kg of cargo for 100 kilometers.
It is also capable of non-stop flights for three hours. The 53-kg UAV can fly at an altitude of 16,000 feet and requires the shortest landing runway length. Karrar, Iran’s first indigenous long-range drone unveiled in August 2010, is capable of carrying a military payload of rockets to carry out bombing missions against ground targets, flying long distances at a very high speed, and gathering information. 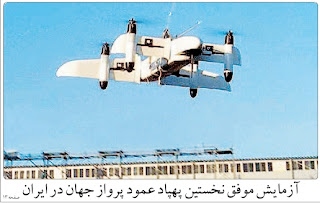 The country’s indigenous unmanned aerial vehicle, Shahed 129, unveiled in September 2012, can carry out combat and reconnaissance missions with its 24-hour nonstop flight capability.
Posted by Steve Douglass at 2:45 PM No comments:

Iran fires on US Drone 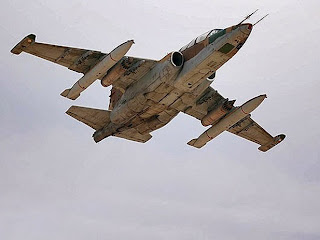 WASHINGTON -- An Iranian attack aircraft fired at least twice at an unarmed U.S. drone conducting routine surveillance in international airspace over the Persian Gulf, the Pentagon said Thursday. The aircraft missed and the drone returned to base unharmed.
The shooting in the Gulf, which occurred just before 5 a.m. EDT on Nov. 1, was unprecedented, Pentagon press secretary George Little said. The incident was not disclosed sooner because the military does not discuss classified surveillance missions, but agreed to answer questions after news reports revealed the shooting.
Little said the drone was about 16 miles off the Iranian coast when the Russian-made SU-25 Frogfoot warplane intercepted it and opened fire. He said it was the first time an unmanned U.S. aircraft was shot at in international airspace over the Gulf.


"Our aircraft was never in Iranian air space. It was always flying in international air space," Little told Pentagon reporters. "The United States has communicated to the Iranians that we will continue to conduct surveillance flights over international waters over the Arabian Gulf, consistent with longstanding practice and our commitment to the security of the region."
According to the Pentagon, the Iranian war plane made at least two passes by the slower-moving drone, firing "multiple rounds."
Little said that once the Predator drone came under fire, it began to move further out and the Iranian aircraft continued to pursue it "for some period of time before letting it return to base." The Iranian plane did not follow the drone all the way back to its base, Little said, declining to say where that base was.
He said there was no other U.S. aircraft nearby that could respond to the attack, and added that the U.S. believes Iran was trying to shoot the drone down.
This is the second incident involving a U.S. drone and Iran.
In December 2011 a U.S. RQ-170 Sentinel drone equipped with stealth technology was captured in eastern Iran. Tehran claims it brought down the aircraft, but U.S. officials said the drone malfunctioned and had to land.

READ THE REST OF THE STORY AT HUFF POST
Posted by Steve Douglass at 2:02 PM No comments: