The International Space Station Program has won the 2009 Collier Trophy 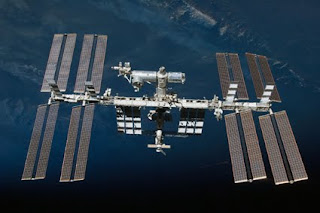 The International Space Station is featured in this image photographed by an STS-130 crew member on space shuttle Endeavour after the station and shuttle began their post-undocking relative separation. Credit: NASA

The International Space Station Program has won the 2009 Collier Trophy, which is considered the top award in aviation. The National Aeronautic Association bestows the award annually to recognize the greatest achievement in aeronautics or astronautics in America.

“We are honored to receive this prestigious award,” said Bill Gerstenmaier, associate administrator for NASA’s Space Operations Mission Directorate. “We're proud of our past achievements to build and operate the space station, and we're excited about the future- there's a new era ahead of potential groundbreaking scientific research aboard the station."

The International Space Station is a joint project of five space agencies and 15 countries that is nearing completion and will mark the 10th anniversary of a continuous human presence in orbit later this year. The largest and most complicated spacecraft ever built, the space station is an international, technological and political achievement that represents the latest step in humankind’s quest to explore and live in space.

Designated as a national laboratory by Congress in the 2005 NASA Authorization Act, the space station provides a research platform that takes advantage of the microgravity conditions 220 miles above the Earth’s surface across a wide variety of fields, including human life sciences, biological science, human physiology, physical and materials science, and Earth and space science.

Upon completion of assembly later this year, the station’s crew and its U.S., European, Japanese and Russian laboratory facilities will expand the pace of space-based research to unprecedented levels. Nearly 150 experiments are currently under way on the station, and more than 400 experiments have been conducted since research began nine years ago. These experiments already are leading to advances in the fight against food poisoning, new methods for delivering medicine to cancer cells and the development of more capable engines and materials for use on Earth and in space.

Now supporting a multicultural crew of six, the station has a mass of almost 800,000 pounds and a habitable volume of more than 12,000 cubic feet – approximately the size of a five-bedroom home, and uses state-of-the-art systems to generate solar electricity, recycle nearly 85 percent of its water and generate much of its own oxygen supply. Nearly 190 humans have visited the space station, which is now supporting its 22nd resident crew.

Boeing is the prime contractor, responsible for design, development, construction and integration of the ISS.

The award will be formally presented to the International Space Station Program team on May 13. The award is named for Robert J. Collier, a publisher who commissioned it in 1910 with the intent to encourage the U.S. aviation community to strive for excellence and achievement in aeronautic development. Past winners include the B-52 Program, the Surveyor Moon Landing Program, the Boeing 747 and the F-22. Other past honorees include the crews of Apollo 11 and Apollo 8, the Mercury 7.

Posted by Steve Douglass at 1:32 PM No comments:

UBL - Does anyone even care anymore?

Osama bin Laden -(UBL) remember him? Where is he, and is the U.S. getting closer to killing or capturing him?

Those are the questions hovering over several recent developments in the Afghanistan war: the capture of Afghan Taliban military leader Mullah Abdul Ghani Baradar, the killing of two key Taliban commanders and an increase in drone attacks.


But several authorities on the eight-year Afghanistan war say no one should expect to see bin Laden in handcuffs anytime soon.

“No, I don’t think we’re getting any closer,” says Stephen Tanner, author of “Afghanistan: A Military History from Alexander the Great to the War against the Taliban."

Tanner says the ISI, Pakistan's Inter-Services Intelligence Agency, knows where bin Laden is hiding, but is not ready to say.

“We got to make a deal with Pakistan because I’m convinced that he’s [bin Laden] protected by the ISI,” Tanner says.

Tanner says that rogue elements within the ISI - if not the Pakistani government – may be using bin Laden as a “trump card” to exert leverage over the United States. Tanner says that Pakistani leaders are concerned that the U.S. will draw closer to India, Pakistan’s chief rival.

“I just think it’s impossible after all this time to not know where he is. The ISI knows what’s going on in its own country,” Tanner says. “We’re talking about a 6-foot-4-inch Arab with a coterie of bodyguards.”

Even if the U.S. draws a bead on bin Laden, he won’t be captured alive, says Thomas Mockatis, author of, “Osama bin Laden: A Biography.”

Mockatis says bin Laden has bodyguards who are tasked with shooting him if his capture seems imminent.

Many in the Arab world wouldn’t even believe reports that bin Laden had been killed, Mockatis says. They would dismiss the news as CIA propaganda and any photographs of bin Laden’s body as fabrications.

Killing bin Laden is important, but what’s more vital is the ongoing U.S. campaign to “constrict” al Qaeda’s operation, Mockatis says. The U.S. has become more successful at taking away al Qaeda’s safe havens, their ability to move agents and finance operations around the globe.

“It’s a grinding down process, the way you deal with organized crime,” Mockatis says. “You constantly keep the pressure on.”
Posted by Steve Douglass at 10:38 AM No comments:

"Big Bird - you are cleared for runway two-niner."

NEW YORK—A child apparently directed pilots last month from the air-traffic control center at John F. Kennedy Airport, one of the nation's busiest airports, according to audio clips. The Federal Aviation Administration said Wednesday that it was investigating.

"Pending the outcome of our investigation, the employees involved in this incident are not controlling air traffic," the FAA said in a statement. "This behavior is not acceptable and does not demonstrate the kind of professionalism expected from all FAA employees." The agency declined to comment beyond the statement.

Recordings from mid-February—during a week-long winter break for many New York schoolchildren—were posted last month on a Web site for air-traffic control-listening aficionados.

The child can be heard on the tape making five transmissions to pilots preparing for takeoff.

In one exchange, the child can be heard saying, "JetBlue 171 contact departure." The pilot responds: "Over to departure JetBlue 171, awesome job."

The child appears to be under an adult's supervision, because a male voice then comes on and says with a laugh, "That's what you get, guys, when the kids are out of school."

In another exchange, the youngster clears another plane for takeoff, and says, "Adios, amigo." The pilot responds in kind.

The FAA said the control tower is a highly secure area for air-traffic controllers, supervisory staff and airport employees with a need to be there. FAA spokesman Jim Peters said children of the tower's employees are allowed to visit but would need to get approval from the FAA first.

"It is not indicative of the highest professional standards that controllers set for themselves and exceed each and everyday in the advancement of aviation safety," the National Air Traffic Controllers Association said in a statement.

Copyright 2010 Associated Press
Posted by Steve Douglass at 7:21 AM No comments:

Baghdad, Iraq (CNN) -- A suicide bomber ended a series of deadly attacks in central Iraq by detonating explosives in a hospital emergency ward where victims of two earlier blasts were being treated.

At least 29 people were killed and 42 wounded in the triple bombing attack in Baquba, northeast of the capital Baghdad.
The first car bomb attack targeted a government office near a police checkpoint. Two minutes later, a second suicide car bomb went off near the party headquarters of former Prime Minister Ibrahim al-Jaafari in central part of the city.
About an hour later, as the victims of the first two explosions were being rushed to Baquba general hospital, a third suicide bomber walked into the hospital's emergency room and detonated a bomb.

The blasts took place just four days before the country is set to hold parliamentary elections -- its second since the ouster of former President Saddam Hussein.
More than 6,000 candidates will compete for 325 seats in the Iraq parliament in the March 7 vote.
U.S. and Iraqi officials have warned of large-scale attacks in the run-up to the voting. And al Qaeda in Iraq's umbrella group, the Islamic State of Iraq, has promised to disrupt the elections.
Iraqi forces have been taking part in drills to improve their response to suicide attacks.
Baquba, the capital of Diyala province, is about 60 km (37 miles) north of Baghdad. Sunni insurgents continue to fight U.S. troops and Iraqi security forces there.
Posted by Steve Douglass at 7:15 AM No comments: