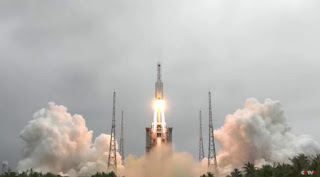 HELSINKI — China launched the first module for its space station into orbit late Wednesday, but the mission launcher also reached orbit and is slowly and unpredictably heading back to Earth.

The Long March 5B, a variant of China’s largest rocket, successfully launched the 22.5-metric-ton Tianhe module from Wenchang Thursday local time. Tianhe separated from the core stage of the launcher after 492 seconds of flight, directly entering its planned initial orbit.

However this core stage is now also in orbit and is likely to make an uncontrolled reentry over the next days or week as growing interaction with the atmosphere drags it to Earth. If so, it will be one of the largest instances of uncontrolled reentry of a spacecraft and could potentially land on an inhabited area.

Most expendable rocket first stages do not reach orbital velocity and reenter the atmosphere and land in a pre-defined reentry zone. Some other larger, second stages perform deorbit burns to lower altitude to reduce time in orbit and lower chances of collisions with other spacecraft or to immediately reenter the atmosphere.

There had been speculation that the Long March 5B core would perform an active maneuver to deorbit itself, but that appears not to have happened. At a Wenchang press conference Thursday, Wang Jue, Commander-in-Chief of Long March 5B launch vehicle, stated (Chinese) that this second Long March 5B had seen improvements over the first launch, but a possible deorbit maneuver was not stated.

Ground based radars used by the U.S. military to track spacecraft and other objects in space have detected an object and catalogued it as the Long March 5B rocket body. Now designated 2021-035B, the roughly 30-meter-long, five-meter-wide Long March 5 core stage is in a 170 by 372-kilometer altitude orbit traveling at more than seven kilometers per second.

A possible amateur ground observation of the rocket core showing regular flashes suggests that it is tumbling and thus not under control. 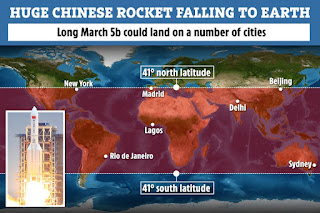 READ MORE HERE:
Posted by Steve Douglass at 8:36 AM No comments: