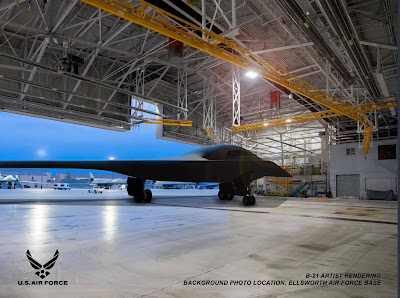 New photorealistic renderings of the B-21 Long Range Strike Bomber have officially landed.

The Air Force together with the bomber's manufacturer, Northrop Grumman, published three new concepts of the next-generation bomber, showing the stealth aircraft in various hangars at bomber bases across the U.S.


One shows a concept of the B-21 tucked away in a hangar at Ellsworth Air Force Base, South Dakota, currently a B-1B Lancer base; a second shows the aircraft at Whiteman Air Force Base, Missouri, which currently houses the B-2 Spirit; and a final photo presenting the B-21 at Dyess Air Force Base, Texas, also a B-1 base.

Last year, the service announced the B-21's first operational base would be at Ellsworth and would also host the bomber's first formal training unit. Whiteman and Dyess are expected to receive B-21 Raiders "as they become available," the service said at the time.

Related: With B-1 Aging and B-21 Still Years Out, Air Force May Soon Have No Go-To Bomber

The B-21 is still years away. Officials have said first deliveries should begin in the mid-2020s, but have been careful not to broadcast too many other details in order to protect details about the B-21's technology. 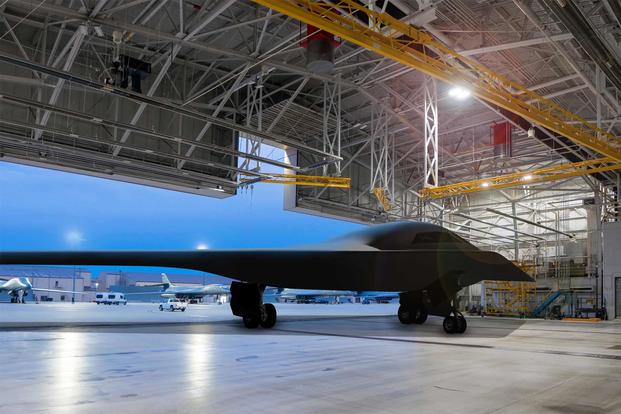 This is an artist rendering of a B-21 Raider concept in a hangar at Ellsworth Air Force Base, S.D. Ellsworth AFB is one of the bases expected to host the new airframe. (Courtesy graphic by Northrop Grumman)

While enthusiasts have compared the squat, sleek profile of the B-21 to the B-2 stealth bomber -- also developed by Northrop -- a specialist for military aviation at the Congressional Research Service was quick to point out one potential difference.

Altering the photo's contrast, "it becomes evident that what looks like the 'beak' is the port leading edge. The nose (as depicted) is not as sharp as B-2," Jeremiah "JJ" Gertler tweeted Friday.

The Air Force plans to buy roughly 100 bombers, but could end up purchasing more depending on the service's needs.

Officials are conveying the program's planned milestones and schedule of events to lawmakers on congressional defense committees, as well as top brass at the Pentagon. In August, Vice Chief of Staff Gen. Stephen "Seve" Wilson said he's counting the days until the bomber's first flight in December 2021.

In 2016, the Air Force announced it would name its next-generation LRS-B the Raider after the service's legendary Doolittle Raiders. The late World War II veteran Richard E. Cole, the last surviving Doolittle Raider, made the announcement that year.

The Air Force awarded Northrop the contract, initially worth $21.4 billion, in 2015. Total costs are expected to exceed $55 billion over the life of the program.
Posted by Steve Douglass at 10:33 AM No comments: