North Korean missiles are all show and no go ... 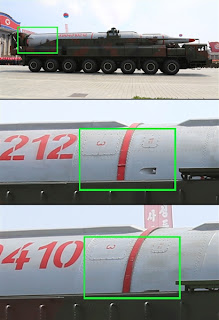 By Robert Windrem and M.L. Flynn, NBC News
PYONGYANG, North Korea -- Missiles paraded through the streets of Pyongyang in recent displays of North Korean military might --  said to be capable of hitting targets throughout Asia and even in the U.S. -- are incapable of flight and are almost certainly nothing more than fakes, according to U.S. government experts and independent analysts.
"My opinion is that it's a big hoax," Markus Schiller, an aerospace engineer in Munich and former RAND Corp. military analyst, said of the intercontinental and medium-range missiles displayed in the North Korean capital in April 2012 and again two weeks ago.
U.S. government experts, having reviewed unclassified images from the most recent parade on July 27, including high-resolution photos provided by NBC News, agreed. “Our assessment is that what we are looking at is most likely simulators used for training purposes,” according to a statement to NBC News.
The experts, who spoke on condition of anonymity, would not discuss the methods used to make their determination.
U.S. and other Western officials have recently expressed concerns over North Korea’s advances in building nuclear weaponry, but many are doubtful that its secretive missile program is capable of delivering such weapons outside a limited area in east Asia.
“That the guy in charge seems to have been purged is the clearest indication we’ve seen so far that they’re having some problems,” said Alexandre Mansourov, a Korea expert and visiting scholar at Johns Hopkins University.
There also are signs that the missile program may be in disarray, including a failed attempt to launch a satellite in April 2012 and the recent disappearance from public view of Pak To-Ch’un, the Politburo member who managed North Korea's weapons production, including its missiles.
A spokesman for North Korea's U.N. Mission in New York did not immediately respond to a request for comment. NBC News asked U.S. government experts and independent military analysts, in the U.S. and overseas, to examine high-resolution images of the Musudan medium-range missile and the ICBM, known as the Hwasong-13, taken at the July 27 military parade.

The consensus: The displayed missiles were built for show, not for flight.

Posted by Steve Douglass at 8:35 AM No comments: