Posted by Steve Douglass at 10:27 AM No comments: 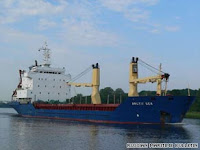 CNN: A ransom has been demanded for a missing Russian cargo ship which vanished two weeks ago after being involved in a suspected hijacking off the coast of Sweden last month, Finnish police told CNN Saturday.

The last known contact with the Arctic Sea was July 31. Mystery surrounds its movements and the fate of its crew.

Authorities said the ransom demand might be from a second group of hijackers who targeted the ship after it was first allegedly hijacked for 12 hours off the coast of Sweden.

"There has been a demand for ransom and the subject is the shipping company, Solchart Management," Jan Olof Nyholm with the Finnish police told CNN.

An international criminal investigation is under way into the alleged hijacking of the vessel, the Arctic Sea. The last known communication with the vessel was July 31.

The probe, involving Interpol, is being handled by Swedish, Maltese and Finnish authorities in cooperation with authorities from another 20 countries, the Malta Maritime Authority said in a statement Saturday.

Finnish police would not say how much ransom had been demanded, or what else they know about the vessel.

"At this point I can't comment on whether we know the whereabouts of the ship. Our top priority is the threat to life and health, so I can't release any more details," Nyholm said. "The investigation has more details, but I can't say any more."

The Arctic Sea, which sails under a Maltese flag, was carrying a 6,500-ton cargo of timber from Finland to Algeria when it reported trouble on July 24.

Its 15-member crew told authorities that eight to 12 people armed with guns and pistols boarded the vessel about 3 a.m. that day, masked and wearing uniforms with the word "police" written on them, the Malta Maritime Authority said.

"During (the attackers') stay onboard, the members of the crew were allegedly assaulted, tied, gagged, and blindfolded and some of them were seriously injured," the maritime authority said in a written statement.

"All crew members were 'hard' questioned for a considerable amount of time. The questioning was related to drug trafficking. Later all crew members were released from their bindings but were locked within cabins until the alleged police rummaged the vessel thoroughly."

The attackers left after 12 hours on the same black rubber boat on which they had arrived, which bore the word "police," the maritime authority said.

The vessel's radar and satellite systems were off-line for two hours during the reported hijacking, during which it was witnessed performing "extreme maneuvers," said Maria Lonegard, a spokeswoman for the Swedish police.

The Finnish shipping company in charge of the ship reported the case to the Finnish police, who referred it to the Swedish police, the Maltese Maritime Authority said. In the meantime, the ship sailed through the English Channel.

Three days later, on July 31, Swedish police reached the ship by phone and spoke with someone they believed to be the captain, Lonegard said.

The crew provided photos of their injuries and written statements about the alleged hijacking, Swedish police said.

Despite that evidence, however, authorities have been unable to confirm the alleged hijacking. Swedish police say they have spoken to a number of witnesses who saw the ship making strange movements, but no one saw the black rubber boat approaching or leaving the Arctic Sea.

The ship has not been heard from since July 31. It did not arrive in North Africa as scheduled August 4.

Authorities have had no explanation for the ship's disappearance until Saturday, when Swedish police said they believe the Arctic Sea has been hijacked a second time. Track reports of the ship's journey »

READ THE FULL STORY HERE
Posted by Steve Douglass at 10:20 AM No comments: