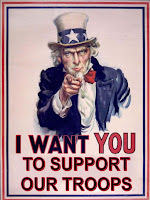 Washington (CNN) -- Whether it's an Army helmet with a thicker shell and better padding, or underwear that can protect a Marine private's privates, the U.S. military is looking at sending the latest gear to Afghanistan so the troops can come home safe and sound.

Next month, the Army is going to start sending the "ballistic boxers" to soldiers in Afghanistan, and the Marines intend for each of their troops there to have four pairs of the "protective undergarments," as they are formally known, before the end of the year.

The heavy silk boxers, which look like shorts that professional cyclists wear, won't stop a bullet or shrapnel from an IED. But the silk can stop small projectiles like those kicked up by an explosion.
"It is expected to prevent fine sands and particles that are thrown up by explosives, so that the tissue wounds are cleaner, less ragged and easier to treat," said Lt. Jamie Larson, a Marines Corps spokesperson. And since the silk is treated with antimicrobial agents, the boxers help protect injured troops from wound infections.

While it may not sound like it affords much protection, silk is actually a very strong fiber, said Brig. Gen. Peter Fuller, who heads the Army office that tests and develops new protective gear. He noted that silk was used by medieval knights "under the mail armor" to protect against wounds from swords and other weapons.

The Marines haven't actually started buying the boxers yet, but the Army has chosen boxers from a company in Northern Ireland called Cooneen Watts & Stone that is already making them for the British military in Afghanistan.

Silk boxers aren't the only step the military is taking to protect the groin.
They are testing various cups that a male soldier will wear over his genitals. One of the cups being considered is made of stainless steel; another is made from high-molecular-weight polyethylene, a plastic that is lighter than Kevlar but better at stopping bullets.

"They all basically work to slow down the fragments. We are looking to prevent penetration of the genitals," said Col. Bill Cole, an Army officer overseeing projects aimed at better protecting soldiers.
In addition, the Army and Marines are looking at undershorts that will have pockets that will hold Kevlar pads to protect the wearer's femoral artery, the main blood vessel to the legs.

While Kevlar may be the answer to protecting arteries and groins, Kevlar helmets may soon be history. Kevlar is a fabric that can, when arranged in multiple layers, stop most bullets.
The Army and Marines are working on upgrading their head protection to the Enhanced Combat Helmet (ECH).

The outer shell is made from the same high-molecular-weight polyethylene plastic being investigated for groin protection. The thicker protective shell would make the helmet lighter than the current Kevlar model. The Army hopes to start giving those to soldiers in Afghanistan by November.

READ THE FULL STORY AT CNN
Posted by Steve Douglass at 8:23 PM No comments: 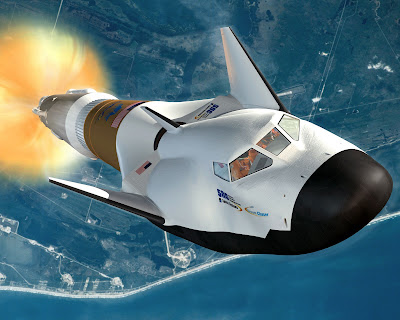 BBC: Nasa has given an indication of the companies it thinks may be closest to offering commercial systems to carry American astronauts into space.

With its shuttles about to retire, the agency has offered $270m (£166m) of funds to four firms to help them mature designs for new orbiting vehicles.

Until then, US crews will have to go to the space station on Russian rockets.

"We are pleased to be completing a significant milestone today in the development of US commercial crew systems, and we are very excited about the future," said Philip McAlister, acting director of commercial spaceflight development at the US space agency.

"We hope someday soon we will see commercial human spaceflight to low-Earth orbit as a robust, vibrant, profit-making, commercial enterprise with many providers and a wide range of public and private users."

The winning companies have a range of concepts under development.

SpaceX, which has garnered much publicity recently, is perhaps the most advanced in its plans. The Hawthorne, California, company has already flown a rocket called Falcon 9 and a capsule called Dragon. It is being offered $75m over the next year if it meets certain targets in advancing Dragon's crew-carrying capabilities.


Boeing's Crew Space Transportation (CST) 100 craft
The long-established Boeing company stands to win the largest award depending on its achievement of goals set by Nasa. Boeing's Houston, Texas, team has a capsule design called CST-100 which could transport up to seven astronauts to the space station. The $92.3m support on offer will help the company get the vehicle through to a key, or preliminary, design review.

Sierra Nevada Corporation (SNC) of Louisville, Colorado, has already received considerable financial support in Nasa's Commercial Crew Development (CCDev) effort. It is now in line to get a further £80m in the latest round of funding. SNC is developing a shuttle-like vehicle called the Dream Chaser that would launch atop a rocket.

The fourth recipient, Blue Origin, of Kent, Washington, is a company set up by Amazon.com founder Jeff Bezos. Blue Origin has kept much of its space development activity secret, but it has requested funds from Nasa to help it mature systems for a cone-shaped crew vehicle. It has been awarded up to £22m.

These include ATK which makes the solid-fuel rocket boosters (SRBs) that lift the space shuttle off the ground. ATK wants to marry an evolution of these SRBs with the main core stage of Europe's Ariane 5 rocket. The concept, known as Liberty, would be used to launch other companies' capsules and spaceplanes.


SpaceX has already flown its Dragon capsule
ATK will now have to secure funds elsewhere if it wants to carry the Liberty idea forward.

Also missing out on CCDev money is United Launch Alliance (ULA). This is the company that operates Atlas and Delta rockets for the US Air Force and for Nasa.

These vehicles frequently orbit satellites, but ULA believes the rockets could be modified to launch humans also.

Sierra Nevada, Boeing and Blue Origin had all talked about using an Atlas 5 to loft their proposed crew ships.

Where Monday's announcement from Nasa leaves ULA's plans is uncertain. Again, it will need to use its own funds or find a partner if it wishes to continue with the project to man-rate the Atlas and Delta rockets. The CCDev process is not a down-selection, so it is conceivable ULA could get an award in a further round.

"Given enough time and money I am confident that multiple US companies could develop safe, reliable and cost effective commercial crew transportation systems," Mr McAlister said.

"And it is my sincere hope that the companies not selected for award today will continue maturing their systems and making progress on their designs so that they can potentially be available at some point in the future for purchase by Nasa and other customers."


Blue Origin is a space company set up by Amazon.com founder Jeff Bezos
Nasa awarded about $50m in its first round of commercial crew contracts. It plans to substantially increase this funding next year to $850m.

There is still much debate, particularly in the US Congress, about the readiness of the private sector to provide safe crew transportation systems. There are also doubts over whether the procurement strategy will deliver significant savings to the US taxpayer.

READ MORE HERE
Posted by Steve Douglass at 9:56 AM No comments: