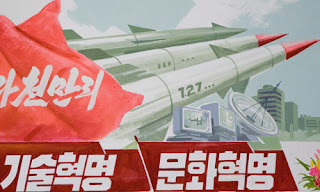 SEOUL/TOKYO, Dec 12 (Reuters) - North Korea successfully launched a rocket on Wednesday, boosting the credentials of its new leader and stepping up the threat the isolated and impoverished state poses to its opponents.
The rocket, which North Korea says was designed to put a weather satellite into orbit, has been labelled by the United States, South Korea and Japan as a test of technology that could one day deliver a nuclear warhead capable of hitting targets as far as the continental the United States.
"The satellite has entered the planned orbit," North Korea's state news agency KCNA said.
North Korea followed what it said was a similar successful launch in 2009 with a nuclear test that prompted the United Nations Security Council to stiffen sanctions against Pyongyang that it originally imposed in 2006 after the North's first nuclear test.
The state is banned from developing nuclear and missile-related technology under U.N. resolutions, although Kim Jong-un, the youthful head of state who took power a year ago, is believed to have continued the state's "military first" programmes put into place by his deceased father Kim Jong-il.
After Wednesday's launch, which saw the second stage of the rocket splash down in seas off the Philippines as planned, Japan's U.N. envoy called for a Security Council meeting. However, diplomats say further tough sanctions are unlikely to be agreed at the body as China, the North's only major ally, will opppose them.
The rocket was launched just before 10 a.m. Korea time (01000 GMT), according to defence officials in South Korea and Japan, and easily surpassed a failed April launch that flew for less than two minutes.
There was no independent confirmation it had put a satellite into orbit.
Japan's likely next prime minister, Shinzo Abe, who is leading in opinion polls ahead of an election on Dec. 16 and who made his name as a North Korea hawk, called on the United Nations to adopt a resolution "strongly criticising" Pyongyang.
There was no immediate official reaction from Washington, South Korea's major military backer, or from China.
China had expressed "deep concern" over the launch which was announced a day after a visit by a top politburo member to Pyongyang when he met Kim Jong-un.
On Wednesday, China's state news agency Xinhua said North Korea had the "right to conduct peaceful exploration of outer space."
But it added: "Pyongyang should also abide by relevant U.N. Security Council resolutions, including Resolution 1874, which demands (North Korea) not to conduct 'any launch using ballistic missile technology' and urges it to 'suspend all activities related to its ballistic missile programme.'"
U.S. Representative Ileana Ros-Lehtinen, a Florida Republican who heads the House of Representatives Foreign Affairs Committee, quickly condemned the launch and called for tougher sanctions.
"It is clear that Pyongyang is moving ever closer towards its ultimate goal of producing a nuclear ballistic missile in order to threaten not only our allies in the Asia-Pacific region but the U.S. as well," she said.
A senior adviser to South Korea's president said last week it was unlikely that there would be a meaningful set of sanctions agreed at the United Nations but that Seoul would expect its allies to tighten sanctions unilaterally
Posted by Steve Douglass at 8:53 PM No comments: