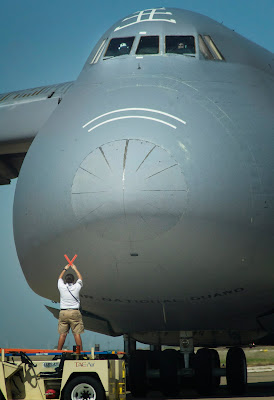 C-5 from Stewart AFB stopping in Amarillo to deliver parts to the Boeing/Bell-Textron V-22 Osprey plant. 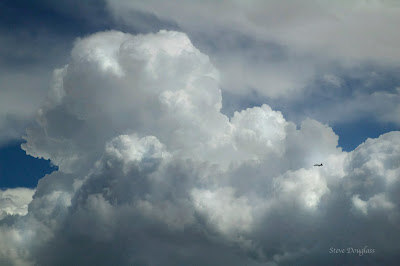 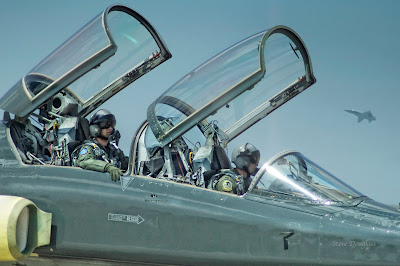 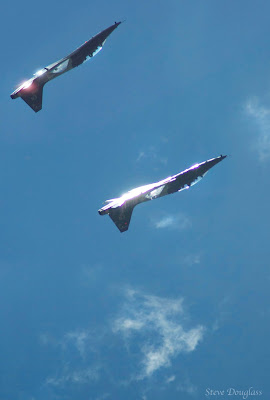 I often wondered what birds must think of planes. This immature (and flightless) Meadowlark was sitting on the fence-line  singing his heart out - but every time a talon flew by - he stopped and seemed to watch.
I kind of thought he was wishing that some day he could fly that fast. He was really tame and posed calmly (seemingly preoccupied by the air show) allowing me to patiently frame this shot. 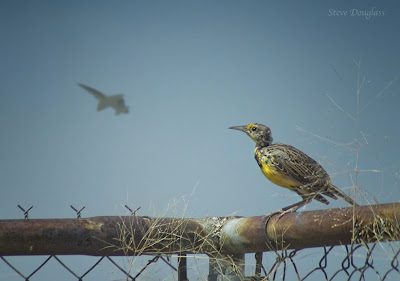 Here's another shot - the Meadowlark singing as if to tell the jet he's a big bird too. The jet was louder. 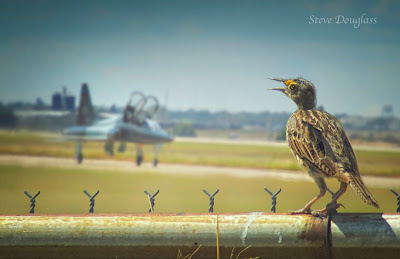 Posted by Steve Douglass at 6:54 PM No comments:

“If they knew we were up here they’d have kittens.” Static said.

“Let’s hope they never find out.” Caysi said, unsure of how well they were hidden.

“Don’t worry. They can’t see a thing. Navy SEALS use this netting all the time.”

Down at Stallion a set of rolling stairs were pushed up against the aircraft. After a few seconds the door opened and a group of people left the plane and began walking down the steps.

“Which one you think he is?” Caysi asked.

“Watch for the salutes and handshakes.” Static said.

A man wearing a blue suit stepped off the aircraft. A photographer stepped up and took his photo shaking hands with several other men also in blue suits.

After a brief ceremony where speeches were made and a band played, the Secretary was ushered over to a reviewing stand.

A Black Hawk helicopter lifted off from the tarmac and disappeared to begin a low sweep of the mountain ranges to the south.

When Stallion security seemed to be satisfied that there were no prying eyes about, the hangar door slowly opened.


“This has got to be the big unveiling.” Static said.

“Remember everything, every line.” Caysi told.

Suddenly the tip of the aircraft, like the point of a spear, could be seen slowly protruding from the now open hangars. Caysi took a quick glimpse at the assem-bled crowd of dignitaries and they were all applauding.

And then they could see it.

Caysi looked at Static. He was holding the binoculars so tight that his hands were shaking. She reached out and steadied them.

“Wow. Pinch me. I have never seen a design so—so perfect.” Static said.

Caysi couldn’t resist and pinched him on the elbow. To her surprise he didn’t react.

“Look how smooth it is. Doesn’t look like some-thing humans could build.”

A very sleek and perfectly black arrow-shaped aircraft taxied out onto the main runway.

Static studied the lines closely. It looked perfectly seamless, no rivets or joints could be seen, as if it was sculpted from the blackest piece of flat slate.

It was instantly clear this aircraft was light years ahead of the clunky hardware Static was used to seeing on the ramp at Holloman.

“You seeing this? Can you remember this?” Static asked Caysi.

“How could I not? It’s etched in my mind like granite.”

“Good. I just hope it takes to the air so we can see it from all angles.”

As if it heard their request, the Black Manta taxied past the reviewing stand and on to the active runway.

Pausing for about thirty seconds, it sat there silent, then the brakes were released and it slowly began to speed up.

Suddenly there was a slight whoosh as the aircraft lifted gracefully up into the air.

Over the next twenty minutes the Manta put on an aerobatic demonstration like no one had ever seen. The Black Manta made turns, flips, barrel rolls, mid-air stalls and other maneuvers that no manned aircraft could ever hope to match.

“Kind of puts the Blue Angels to shame, doesn’t it?” Caysi said.

Next the Manta did a super high-speed climb up in to the sky until everyone lost sight of it, including Static and Caysi.

“I’m telling you – I was watching it through the binoculars and it changed shape. It went from a sort of wide triangle to more of a cone.” Casyi said.

“How am I supposed to model that?” Static replied.

Just when they thought it wasn’t coming back, Static and Caysi heard a very low rumble coming from behind them.

They turned to see the Manta flying slowly over the very ridge they were hiding on, just a few dozen feet over their heads.

Downblast from the engines began tearing at the camouflage netting.

Clinging on for dear life, both Caysi and Static had to fight hard to hold down the netting, also too aware that all eyes at the base were probably trained on the very ridge they were hiding on.

But as fate would have it, the netting held fast and the Manta moved away.

Static was amazed. He sat there with his mouth wide open not quite comprehending what he had just seen.

“Uh - - are airplanes supposed to be able to fly like that?” Caysi asked.

“They are now, I guess. Someone just rewrote the rules of aerodynamics.” Static said.

The Black Manta landed, gracefully touching down like a bird on a tree branch. It then rolled slowly up to the reviewing stand and stopped

Looking at the aircraft through binoculars, Caysi no-ticed that two men push a ladder up to what looked like a cockpit transparency.

“I thought you said it was unmanned?” she said.

“It is. Isn’t it?” Static said raising the bin-oculars to his eyes.

The cockpit opened up to reveal a pilot who was busy releasing the straps on his ejection seat. He then re-moved his flight helmet and handed it to a technician, climbed out of the seat and down the ladder.

“I may be mistaken, but that’s definitely a human.”

Static was perplexed. “I was positive it was unmanned.

The pilot walked over to the crowd and began shaking hands with the dignitaries assembled. The technician reached inside the cockpit pushed a few buttons, then climbed down the ladder and rolled it away from the aircraft.

As he walked away the engines on the Manta began to race, then it did something no one expected.

It taxied to the main runway and took off, by itself, this time without a pilot.