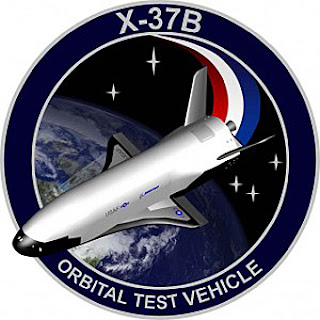 Published: 12/10/2012 07:42 AM EST on SPACE.com
The secretive U.S. Air Force X-37B robotic space plane has been cleared to lift off Tuesday (Dec. 11).
The X-37B vehicle and its cargo bay packed with a classified payload is set to make the third mission of the program. Also called Orbital Test Vehicle-3, or OTV-3, the unpiloted craft is slated to be hurled into Earth orbit by an Atlas 5 rocket from Florida's Cape Canaveral Air Force Station (CCAFS) at 1:03 p.m. EST (1803 GMT).
There's an interesting angle to the upcoming mission. This third flight will use the same X-37B spacecraft that flew the first test flight, the OTV-1 mission, back in 2010.
That maiden voyage of the miniature space plane lasted a little over 224 days, orbiting Earth from April 22, 2010 to Dec. 3 of that year, and finally landing on autopilot at a specially prepared runway at Vandenberg Air Force Base in California. [Photos: U.S. Military's X-37B Space Plane]
A different X-37B vehicle made a similar Vandenberg touchdown this past June 16, after staying in orbit 469 days on its OTV-2 mission.
The X-37B program is being run by the U.S. Air Force Rapid Capabilities Office. The two space planes in the fleet — which are 29 feet (8.8 meters) long and 15 feet (4.5 m) wide, with a payload bay about the size of a pickup truck bed — were built by Boeing Government Space Systems.
The Air Force's Rapid Capabilities Office has a mission of expediting the development and fielding of select Department of Defense combat support and weapon systems by leveraging defense-wide technology development efforts and existing operational capabilities.
According to an Air Force factsheet, the Rapid Capabilities Office is working on the X-37B Orbital Test Vehicle "to demonstrate a reliable, reusable, unmanned space test platform for the United States Air Force."
While both previous X-37B missions touched down at Vandenberg, the Air Force has been reviewing the prospect of landing future flights at NASA's Kennedy Space Center in Florida, next door to the Cape Canaveral launch site. Returning the robotic space plane to the KSC landing strip — which was used by NASA's now-retired space shuttle fleet — would lower costs, because the vehicle wouldn't have to be transported back from California to Florida after each mission.

Posted by Steve Douglass at 10:17 AM No comments: