A Whidbey Island-based EA-6B Prowler electronic warfare aircraft has gone down in Lincoln County and officials believe all three personnel on board were killed in the crash.

The Prowler reportedly went down just after 9 a.m., near Coffee Pot Lake Road and Duck Lake Lamona Road west of Harrington and northeast of Odessa, according to Scott McGowan, fire chief for Lincoln County Fire District No. 6.

HaLee Walter lives near the scene where the aircraft went down and said she heard what she described as a sonic boom and then her whole house shook.

"My kids and my dog ran upstairs, and then I had gone outside and I could hear another a military aircraft because they fly all the time down here and they're very loud and we're used to them, and I could hear the aircraft and I'm like 'Oh you know maybe it was just a sonic boom,'" she said.
I called my husband and I'm like 'Did you just feel that? Did you hear that?' and he's like yeah, he's like 'I think an airplane just went down, I just saw a huge plume of smoke north of the house.'"


"I went outside and of course I could see the smoke and then I took my son and we drove other there because it didn't look like it was very far from our house, and the ambulance and police and fire trucks were all there and [the] plane had gone down and there was still another military aircraft circling," she added.

A crew from the National Transportation Safety Board is heading to the scene and should be there around 11 a.m.

Whidbey Island NAS is home to the U.S. Navy's tactical electronic warfare squadrons, which fly the EA-6B Prowler and the EA-18G Growler. The Growler is based on the F/A-18 Hornet fighter attack aircraft and carries a two-person crew. The Growler is being phased into service to replace the Prowler, which carries a four-person crew.

Navy aircrews fly across Eastern Washington for training exercises, according to Kim Martin, a public information officer for Whidbey Island, who confirmed an overflight of two pair of Growlers over the Spokane area in September 2011.

"It was a routine training session. That's a designated military training route part of their flight training curriculum," Martin said in 2011.

In addition to being home to the Navy's electronic warfare squadrons, the Navy's Electronic Attack Weapons School is based at Whidbey Island NAS. The school trains aircrews in the tactical operations of the Navy's Prowlers and Growlers.

The last mishap involving an EA-6B Prowler in our area was in March 2006, when a Prowler with VAQ-135 "Black Ravens" went down during a training exercise in a remote area of Umatilla County in northeastern Oregon. All four crewmen aboard the aircraft ejected safely.

The Northrop Grumman EA-6B Prowler is based on the A-6 Intruder platform and was first introduced into the fleet in 1970. While they have served in combat in conflicts ranging from Vietnam to Desert Storm, Iraq and Afghanistan, none have ever been lost in combat. 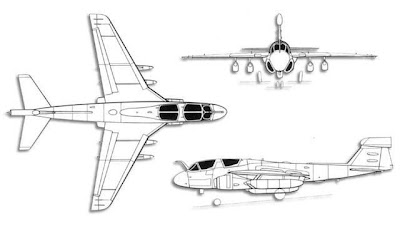 READ THE REST OF THE STORY HERE
Posted by Steve Douglass at 12:40 PM No comments:

The assault, one of the deadliest so-called “insider attacks” this year, occurred in Wardak province during a meeting between U.S. and Afghan troops ahead of a joint mission, according to U.S. and Afghan officials.

The attacker seized a machine gun in the back of a police pickup truck and opened fire on the U.S. and Afghan forces in a police compound, according to a senior Afghan military official who spoke on the condition of anonymity because he was not authorized to comment on the incident. It was unclear whether the gunman was a Taliban recruit or acting out of personal enmity. The attacker was reported killed in the ensuing firefight.

In addition to the men killed, about a dozen U.S. and Afghan troops were injured, including the district police chief, officials said.

The attack came a day after a tense President Hamid Karzai accused the American military of colluding with the Taliban to justify a continued U.S. presence in the country. Karzai’s comment that “the Taliban are serving the foreigners” complicated an already tense weekend visit from U.S. Defense Secretary Chuck Hagel, whose trip was marred by the Afghan president’s decision to call off a key prison handover from U.S. to Afghan forces and the cancellation of a joint news conference. The news conference was called off at U.S. insistence — ostensibly due to security concerns.

Monday’s attack could further threaten the fragile relationship between the two nations. U.S. officials have long advocated the small-footprint approach exemplified by teams of Special Operations forces as a way forward during the American military withdrawal, but Karzai has been critical of those teams, particularly in Wardak.
READ THE FULL STORY AT THE WASHINGTON POST
Posted by Steve Douglass at 11:48 AM No comments: