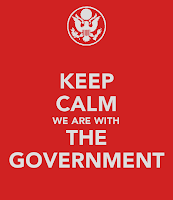 Barack Obama’s intelligence chief is said to be in frequent and unusual contact with a military intelligence officer at the center of a growing scandal over rosy portrayals of the war against the Islamic State, the Guardian has learned.
James Clapper, the director of national intelligence, is said to talk nearly every day with the head of US Central Command’s intelligence wing, Army Brigadier General Steven Grove – “which is highly, highly unusual”, according to a former intelligence official.

Grove is said to be implicated in a Pentagon inquiry into manipulated war intelligence.

In communications, Clapper, who is far more senior than Grove, is said to tell Grove how the war looks from his vantage point, and question Grove about Central Command’s assessments. Such a situation could place inherent pressure on a subordinate, sources said.

Knowledgeable former officials are doubtful that Clapper directly intends to manipulate intelligence. And they do not say that the director of national intelligence – who apologized to his Senate overseers in 2013 for publicly misleading Congress on the scope of domestic surveillance – ordered Grove or anyone else to change the command’s assessment of the war.

But one former intelligence official said Clapper “has to be careful of the Cheney effect, going over to the CIA and how does that affect people” – a reference to pressure felt by CIA analysts before the 2003 Iraq invasion to portray Saddam Hussein as posing a more dire threat than he actually did, following then Vice-President Dick Cheney’s direct interaction with far more junior analysts and officials.

Clapper’s calls, knowledgeable sources speaking on condition of anonymity said, placed Grove in a difficult bureaucratic position: between the nominal leader of the entire US intelligence apparatus and his lower-level analysts, several of whom consider the year-long war against Isis to be in dire straits.

Grove and his civilian deputy, Greg Ryckman, are said to be the sources of dissatisfaction among analysts within Central Command, where an internal controversy about integrity in intelligence has now sparked an official inquiry by the Pentagon inspector general.

More than 50 intelligence analysts, both those within Central Command and their seconded Defense Intelligence Agency (DIA) colleagues, have registered complaints about manipulated or skewed data, the Daily Beast reported on Wednesday. Analysts object to internal portrayals, said to come ultimately from Grove and Ryckman, of a war proceeding better than Isis’s persistent hold over large swaths of Iraq and Syria suggests. The existence of the Pentagon inquiry was first reported last month by the New York Times.

Some of those skewed and upbeat assessments have reportedly been delivered to Barack Obama. The White House has frequently defended its “Iraq first” strategy; one source interviewed by the Guardian said Obama aides were not receptive to hearing “the narrative that Isis is winning”.

READ MORE AT THE GUARDIAN
Posted by Steve Douglass at 11:02 AM No comments: 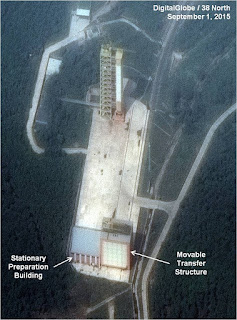 38 NORTH: While speculation that North Korea intends to launch a long-range space launch vehicle (SLV) on the 70th anniversary of the Korean Workers’ Party in October continues, it is still not possible to determine whether Pyongyang will conduct such a launch using commercial satellite imagery. Imagery from August 27 and September 1 show that a movable structure on the launch pad—intended to transfer SLV stages and components from the Stationary Preparation Building to the gantry tower—has shifted back and forth since observed in mid-August.

That movement may have occurred for a number of reasons ranging from testing the recently completed movable structure to launch preparations. Besides the fact that the general low level of activity throughout the facility suggests a launch is not going to occur over the next few weeks, in the case of a possible October launch, it is probably still too soon to move the SLV to the gantry.

Construction activity at the Sohae Satellite Launching Station (“Tongchang-ri”) since spring 2015 has made it more difficult to spot launch preparations. Nevertheless, there are indicators likely to be present a few weeks before a launch that such preparations are underway, such as a significant increase in fuel loading and pressure testing activity at the fuel and oxidizer buildings. Moreover, it may also be possible to spot the SLV itself at the gantry.

Recent imagery also shows construction at the vertical engine test stand that will allow the testing of larger, more capable rocket engines is proceeding rapidly. That work, however, is unrelated to the question of whether the North will conduct a new launch in the near future.

READ MORE AT 38 North
Posted by Steve Douglass at 8:31 AM No comments: 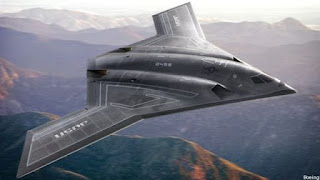 As Washington eagerly awaits news of a winner for the new bomber development contract, the U.S. Air Force’s covert project is further along than officials have let on, with years worth of risk-reduction work already done.
The Air Force began to hint at this secretive history in a Sept. 1 Pentagon briefing to think tankers outlining a program rooted in negotiations with former Defense Secretary Robert Gates that fundamentally shaped an atypical acquisition approach to this effort.
This appears to be the beginning of an unusually savvy communications strategy by the Air Force leading up to an announcement that could come in days, or possibly weeks, on which team will build the Long-Range Strike Bomber – Northrop Grumman orBoeing/Lockheed Martin. It could also be a response to some that suggest its unconventional approach was an indictment of the service’s acquisition corps, which made major missteps in program management in the last decade.
In the 2-hr. briefing, the Air Force outlined a few key points about the procurement strategy behind what is expected to be an $80 billion-plus project to field 100 new, stealthy bombers. It was briefed under Chatham House Rules, meaning the information cannot be cited to a specific person. An Air Force spokesman present for the session declined to identify the briefer.
Only glimpses of the program were given. But they hint at a much more mature effort than previously stated and backed by government money doled out years ago to each team, meaning the forthcoming announcement of a development contract winner will not underpin a new-start program.

While Washington has been on the edge of its seat to discover which team will nab the contract, the Air Force’s Rapid Capabilities Office (RCO) has apparently been hard at work managing risk reduction with both contractors for the program since Gates issued a classified memo launching LRS-B in February 2011, according to a source briefed on the project.
Gates terminated the Next-Generation Bomber, the precursor to LRS-B. That earlier project was far more ambitious and expensive, in part because of the assumption that the aircraft would operate nearly independently, which drove requirements up. NGB would have needed to be capable of its own intelligence and other functions that LRS-B will get through support from a network of already fielded Air Force platforms. Ever skeptical of high-tech promises, Gates restarted the project with a lower-cost, reduced-risk approach. This decision was made as the F-35 was struggling with major cost and technical issues, prompting skepticism from Pentagon leaders.
This likely led to the choice of the RCO as the procurement overseer, bypassing the Air Force’s standard acquisition corps, which is typically used to manage fighter, bomber and weapons programs. The RCO reports to a board of directors chaired by Pentagon procurement chief Frank Kendall; Air Force Secretary Deborah Lee James, Chief of Staff Gen. Mark Welsh and service acquisition head William LaPlante are also on the board. With Kendall as head, the Office of the Secretary of Defense has unusually deep insight into the ins and outs of the project, perhaps a strategy backed by Gates by design to guard against requirements creep.
Because the RCO is designed to quickly integrate and field technologies, it is often closer to the art of the available than other procurement agents may be. It is also, most likely, briefed on available classified technologies, potentially to include the classified work behind the RQ-180 intelligence aircraft built by Northrop Grumman for intelligence collection. This stealthy, penetrating spy aircraft likely will work hand-in-hand with LRS-B to collect and relay intelligence and bomb damage assessments on missions in protected airspace.
At the time the RCO was chosen, the service’s procurement corps was saddled with criticism for missteps in buying both a KC-135 and HH-60G replacement, so it could have been a political move to insulate LRS-B from similar scrutiny. The office was established in 2003 to quickly upgrade the air defense system protecting Washington after the Sept. 11 terrorist attacks. It is led by Randall Walden (who formerly oversaw procurement of intelligence aircraft such as the U-2, Global Hawk and Reaper).
Since the 2011 Gates memo, both contractor teams have received risk-reduction funds for specific areas thought by the RCO to be the most risky, including integration of the propulsion system onto the aircraft and antenna design, a key challenge for any stealthy aircraft that is intolerant of protruding communications nodes, the source said. An Air Force spokesman declined to say how much money has been provided, but he confirmed both teams are funded. The briefer at the think tank meeting cited some wind tunnel testing, but no details on what was tested – subscale models, full demonstrators, subsystems – were provided. One source suggests the teams are already past the preliminary design review phase of the project, “years farther along” than previously acknowledged by the Air Force.
The briefer indicated the bomber would be optionally manned, not a surprising design choice. The relatively large size of a heavy bomber means the size/weight/power penalty for a cockpit is fairly low. Also, service officials would want a piloted aircraft for testing, as unmanned testing is subject to thornier constraints. “Unmanning” the bomber by equipping it with proper command and control and software would be a relatively simple addition, and hooks are built in to do so if desired. But for the near term the bomber will be manned.

read the rest of the story here:

Posted by Steve Douglass at 11:15 AM No comments: