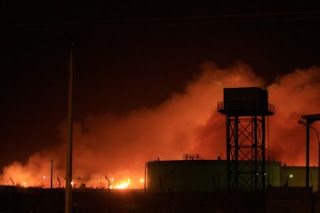 TIME:On Oct. 23, an enormous explosion erupted around a government-run ammunitions factory on the outskirts of Sudan‘s capital Khartoum. Terrified residents in the area reported a blackout, the whizz of a rocket, then a huge blast which sent white sparks into the night sky and materiel flying in all directions. While the first official report suggested that it was due to an accidental explosion in a storage room, Khartoum later blamed Israel for launching the attack. “We believe that Israel is behind it,” said Information Minister Ahmed Belal Osman adding that the planes had approached from the east.
The Sudanese government claims that four Israeli strike planes launched the attack, which partially destroyed al-Yarmouk ammunition factory and killed two civilians. “The main purpose is to frustrate our military capabilities and stop any development there and ultimately weaken our national sovereignty,” Osman said adding that “Sudan reserves the right to strike back at Israel.” Meanwhile, the spokesperson of the Sudanese army (SAF), Al-Sawarmi Khalid Saad, suggested there could be spies within the SAF as well; the military had had plans to relocate the factory. He also said that Israel had previously voiced their concern about the factory but had acted on false information that they were producing heavy weapons.
The strike could be the latest incident of a longstanding clandestine war between Sudan and Israel—spurred by the latter’s desire to thwart the alleged supply of weapons from or via Sudan to Hamas, the Islamist group ensconced in the Gaza Strip. It’s believed that, with a growing number of seaborne arms shipments from Iran, a Hamas ally, getting seized and confiscated, Tehran has used Sudan as a staging ground to supply Hamas’s fighters overland.
Still, analysts have voiced scepticism over Khartoum’s latest accusations. “The Sudanese officials accounts seem a bit far fetched,” Sudan expert at Jane’s Intelligence Richard Cochrane told TIME. “If the aircrafts were supposedly radar evading then how did they know were four?” Cochrane also highlighted the possibility that it was an accidental explosion in the storage room, as had initially been reported by the Khartoum state governor. “There has been a lot of pressure on the Sudanese regime internally. Military campaigns in the South are not going well, there’s social unrest on the streets, a declining economy,” says Cochrane. “These are times of internal pressure when the regime would be keen to deflect attention outwards and Israel has always been a prime candidate”
Sudanese political analyst Alhajj Hamad challenges claims that there were four planes which conducted the attack. Instead, Hamad concludes from speaking with military sources, there was only one plane, which was a drone. He also says that his military sources say the air strike did not target the factory but was actually very specific. “It was targeting a drone ammunition store next to the factory, which in turn affected the factory,” he told TIME. “As usual there is an official story, and another story.” Fueling rumors of further obfuscation, local reporters say they were prevented from viewing the attack site.
While Sudan’s information minister stated that the factory made “traditional weapons,” it appears there might have been something more valuable. According to Israeli military analyst Alon Ben-David, it must have been a considerably high valuable target for Israel. “You don’t send four strike fighters 1900km to destroy a factory that produces grad rockets,” Ben-David told TIME. “It also puts into question whether strike aircrafts were actually used.” It would have been a major operation requiring refueling, support aircrafts, electronic mission aircrafts and rescue support, explains Ben-David. “A lot to just prevent arms smuggling.”
Israel Defence Minister Ehud Barak refused to comment on Channel 2 News, saying “I have nothing I can say about the matter.”
If Khartoum’s allegations are correct, this will not be the first time Israel has struck out at Sudan. In 2011, Israel launched an attack on a car in Port Sudan which killed two people. Rumours say one of the people killed was a high ranking Hamas official. At the time, Ali Karter, Sudan’s Foreign Minister, said Israel had launched the attack to ruin Sudan’s chances of being removed from the U.S. list of state sponsors of terrorism. They had been placed on the list in 1997 for supporting various terrorist groups and harboring Osama bin Laden during the 1990s. In 2009, Israel was blamed for reported drone attacks on weapons smuggling convoys in northeastern Sudan. In 2010, Mahmoud Mabhouh, a key Hamas arms smuggler, was assassinated in Dubai. Israel declined to comment on all these incidents.
Sudan appears to be taking this latest attack seriously. Sudan’s envoy to the UN Security Council Daffa-All Elhag Osman has said he intends to file an official complaint. And Khartoum has said it’s planning decisive actions against Israeli interests, adding that they now have the right to do so when and how they choose. Whether or not Sudan has the capability, though, is far less certain. For all the bluster, analysts aren’t expecting much of a retaliation. Although it might have only been an ammunition storage depot, the attack could mean much more for Tel Aviv.“These kind of attacks are always an example of one’s abilities,” says Abon-David. “If you go the same distance east, they have demonstrated their capability to reach Tehran at a crucial time.”