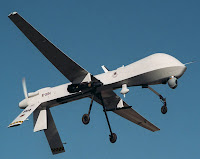 An unmanned plane crashed through a perimeter fence at Cannon Air Force Base Wednesday morning before coming to rest in a nearby cornfield.

There were no injuries, according to a statement from Cannon.

The Unmanned Aerial Vehicle (UAV) reportedly taxied off the base runway, crashing before it got airborne.

The aircraft was carrying practice munitions that posed no threat, Cannon stated in a press release.

The crash occurred off of N.M. 467 just east of Cannon’s south perimeter gate, also known as the Portales Gate.

Curry County Undersheriff Wesley Waller said deputies were called to assist Cannon personnel around 8:30 a.m. but left shortly because base personnel had the situation under control.

Joe Black said he was contacted by sheriff’s deputies just after 8:30 a.m. and went out to the crash site. Black manages the farm for owner Art Schaap.

Black said there were base emergency response vehicles on scene and hazardous materials personnel in protective clothing cleaning the area.

“It looked like they had it pretty well under control,” Black said.

He said he didn’t see any fluid leaks and there was no significant damage to crops or nearby irrigation equipment.

“It was approximately 20 to 30 feet from our pivot system ... (the damage) was just their fence and probably a little bit of road work that will have to be done,” he said. “But it was okay, everything’s going to be okay.”

Black said in eight years working on the farmland near the base, “we see a lot of planes every day go over,” but he has never seen an aircraft crash in the area before.
Cannon personnel are continuing to recover debris.

Cannon Spokesman Elliott Sprehe said the cause of the crash is unknown and more information will be released as it becomes available.
Posted by Steve Douglass at 3:31 PM No comments: 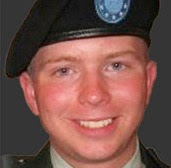 Washington (CNN) -- The Pentagon is focusing on jailed Army Pfc. Bradley Manning as the main suspect in the leak of tens of thousands of secret U.S. military documents related to the war in Afghanistan, a senior Pentagon official told CNN Wednesday.

Manning, 22, is believed to have accessed a worldwide military classified internet and e-mail system to download tens of thousands of documents, according to the official, who did not want to be identified because of the ongoing criminal investigation of the soldier.

The FBI is assisting in the investigation as well, its director, Robert Mueller, said Wednesday.
"We're currently supporting the (Defense Department) investigation into that leak, and to the extent that DOD needs our assistance or we can be of help we are providing that support at this juncture," Mueller told the Senate Judiciary Committee. "I can't say as to where that particular investigation will lead."

The Pentagon official said investigators now believe Manning logged into a system called the Secret Internet Protocol Router Network, which essentially provides military members who have appropriate security clearances access to classified e-mails and the military's classified internet system. But the official emphasized passwords and other control measures such as physical access are needed to log onto specific systems that provide information classified at the highest levels.

Pentagon officials have said for the past several days that so far the only material they have seen on the website WikiLeaks.org is classified at the "secret" level, a relatively low-level designation that allows for a large number of military personnel to access the information.
Video: Pentagon has 'main suspect' in leak

The senior Pentagon official told CNN that for now, Defense Secretary Robert Gates is relying on the Army criminal investigation into Manning and the leaks to determine how it happened and what might need to be done to prevent future cases.
"The secretary is determined to get to the bottom of this," the official said.

The editor-in-chief of WikiLeaks, Julian Assange, has refused to say where his whistle-blower website got about 91,000 United States documents about the war. Some 76,000 of them were posted on the site Sunday in what has been called the biggest leak since the Pentagon Papers about the Vietnam War.

Pentagon officials have not found anything top-secret among the documents, a Defense Department spokesman said.

"From what we have seen so far, the documents are at the 'secret' level," Col. David Lapan said Tuesday. That's not a very high level of classification.

Lapan emphasized that the Pentagon has not looked at all of the papers published on WikiLeaks.
President Barack Obama said Tuesday that he is "concerned about the disclosure of sensitive information" about the U.S. mission in Afghanistan but asserted that the documents don't shed much new light on the war.

Manning was charged in June with eight violations of the U.S. Criminal Code for allegedly illegally transferring classified data, reportedly including an earlier video that wound up on WikiLeaks.org. The private had top-secret clearance as an intelligence analyst for the Army when he was stationed in Iraq.

READ THE FULL STORY AT CNN HERE
Posted by Steve Douglass at 1:39 PM No comments: