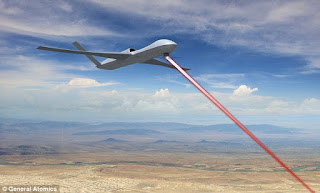 As North Korea marches toward its goal of threatening the United States with nuclear weapons, the Pentagon is racing to add a new component to its missile defense system: a revolutionary drone laser weapon capable of zapping rockets almost as soon as they are launched.

The U.S. Missile Defense Agency says it has conducted tests of a “directed-energy airborne laser” fired from a military drone. The weapon, which would be carried by remote-control aircraft loitering high over suspected enemy ballistic missile launch sites, would add an early interception ability to the current system, which relies on “metal-to-metal” missile interceptors guided by an elaborate system of radar and satellites.

“Our vision is to shift the calculus of our potential adversaries by introducing directed energy into the ballistic missile defense architecture,” agency spokesman Christopher Johnson wrote in an email response to a Las Vegas Review-Journal inquiry. “This could revolutionize missile defense, dramatically reducing the role of kinetic interceptors.”

“We will select the best designs, develop a demonstrator system for flight test in 2020, and piggyback on ballistic missile defense tests in 2021,” Johnson said.

The first airborne tests are slated to take place by 2021, service officials said.

The developmental efforts are focused on increasing the power, precision and guidance of existing laser weapon applications with the hope of moving from 10-kilowatts up to 100 kilowatts, Air Force officials said.

Service scientists, such as Air Force Chief Scientist Gregory Zacharias, have told Scout Warrior that much of the needed development involves engineering the size weight and power trades on an aircraft needed to accommodate an on-board laser weapon. Developing a mobile power source small enough to integrate into a fast-moving fighter jet remains a challenge for laser technology.

Air Force leaders have said that the service plans to begin firing laser weapons from larger platforms such as C-17s and C-130s until the technological miniaturization efforts can configure the weapon to fire from fighter jets such as an F-15, F-16 or F-35.

Air Combat Command has commissioned the Self-Protect High Energy Laser Demonstrator Advanced Technology Demonstration which will be focused on developing and integrating a more compact, medium-power laser weapon system onto a fighter-compatible pod for self-defense against ground-to-air and air-to-air weapons, a service statement said.

Air Force Special Operations Command has commissioned both the Air Force Research Laboratory and the Naval Support Facility Dahlgren to examine placing a laser on an AC-130U gunship to provide an offensive capability.