Ever since the images of three mystery aircraft that Dean Muskett and myself photographed near Amarillo were published, I have been deluged with requests for more information and images from the press and the general public.

The comments on various websites and forums have been interesting a well, ranging from the ridiculous, "It's the mother ship from Zeta II Reticuli) to the scoffers "Steve Douglass is a fraud and a phony) and to the educated, "I know aircraft and these are not B-2s."

With the admission that Whiteman AFB had no B-2s flying that day and also (since the original article was published) that the Edwards B-2 test bird was also not flying, the mystery deepens. If they were admittedly not B-2s - what were they?

Sorting through the hundreds of e-mails and comments I personally received, a pattern of sightings of these aircraft have emerged and I have a pretty good idea where they are based but it's something I'm not going to reveal until I have definitive proof.

And just when the hub-bub had slowed down, something interesting happened yesterday. At least two and possibly three times yesterday a 3 ship formation of B-2s flew over Amarillo.

One around 3 PM (which was witnessed and photographed by a friend of mine) and then again (by myself) while I was at my grandson's ball game. I even watched as they did a very wide turn,  went to the north with one of the B-2s coming over again flying the same track. Call sign monitored was "REAPR" flight.

So what is the Air Force up to? Why the sudden rash of B-2 overflights over my city?

Is this some kind of nod to us Interceptors - that the schedulers at Whiteman slipped into their flight training planning to see if they'd be noticed? A sly joke? Or is it something else - are they conditioning us with so many B-2 overflights that other flights of the mystery aircraft will go unnoticed?

As one of my friends remarked (his photo below) "Just saw another flight of B-2s heading east. That's more sightings in one day then I've had in the 2 1/2 years that I've lived here. I will say that's not a very nice trick to play on somebody. When I first looked up and saw them, they were just black triangles. Wasn't till I got my camera that I could tell they were B-2s. Got me all excited thinking maybe our mystery aircraft came back."

One thing was for sure, they were noticed and once again my phone was deluged with texts and calls alerting me to what I already knew that several billion dollars of B-2s were flying over Amarillo, something very unprecedented and not to mention very expensive.

That said, the overflight did provide a good reference to compare Dean and my mystery aircraft to. It's even clearer now the aircraft we photographed were not B-2s. The sweep angle (and as pointed out in the original post) the trailing edge are completely different from a B-2.

From personal observation it was also easier to gauge size. I'd say our mystery aircraft was about two-thirds the size of a B-2.

In closing the mystery aircraft remains a mystery and I have a new quest to get better images from where I think it might be based.

Soon I will publish the raw images for anyone to analyze, but until then only select images will be released as they are still being scrutinized by aviation and forensic photography experts. Below are a few enhanced frames that you can use to compare to the B-2 I photographed yesterday.

Again, inquiries have been made to Whiteman AFB Public Affairs office. Stay tuned for their reply.

UPDATE: I just received this reply, not quite as friendly as the last one.

Thanks for your query. For this and any future queries regarding this issue, as a matter of operational security, we will not discuss flight schedules and flight paths.

UPDATE: Since the publication of this post I've received many photos showing the (what seems to me) elaborate display put on by Whiteman's B-2s over West Texas.

Apparently the very public show was witnessed by a lot of West Texans, the normally invisible bomber doing it's best to be seen by as many people as possible, pulling long contrails in the clear blue skies.


The display worthy of the Thunderbirds was seen from Roswell, New Mexico to Midland to Amarillo- the same apparent area where the mystery aircraft were spotted. 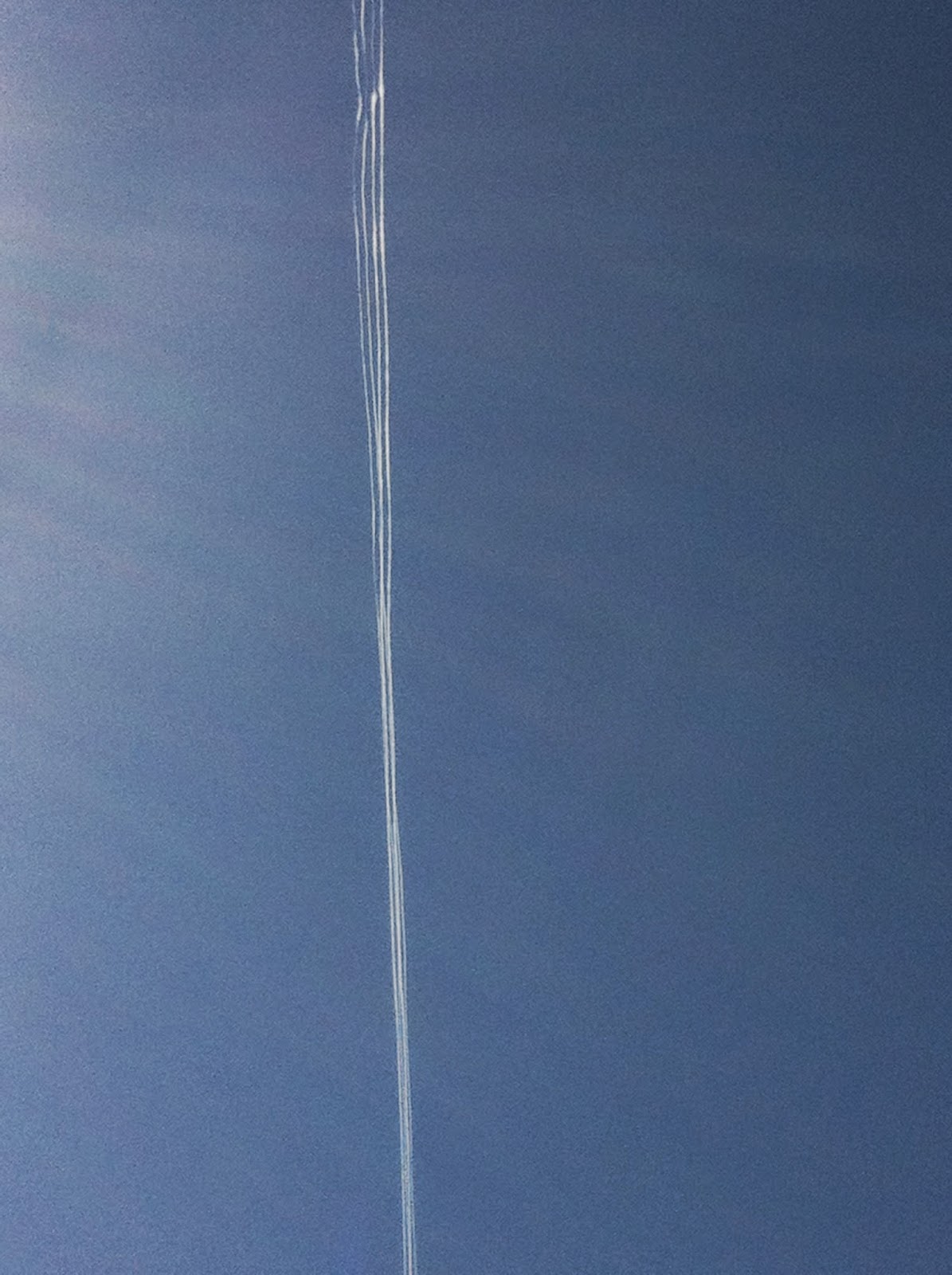 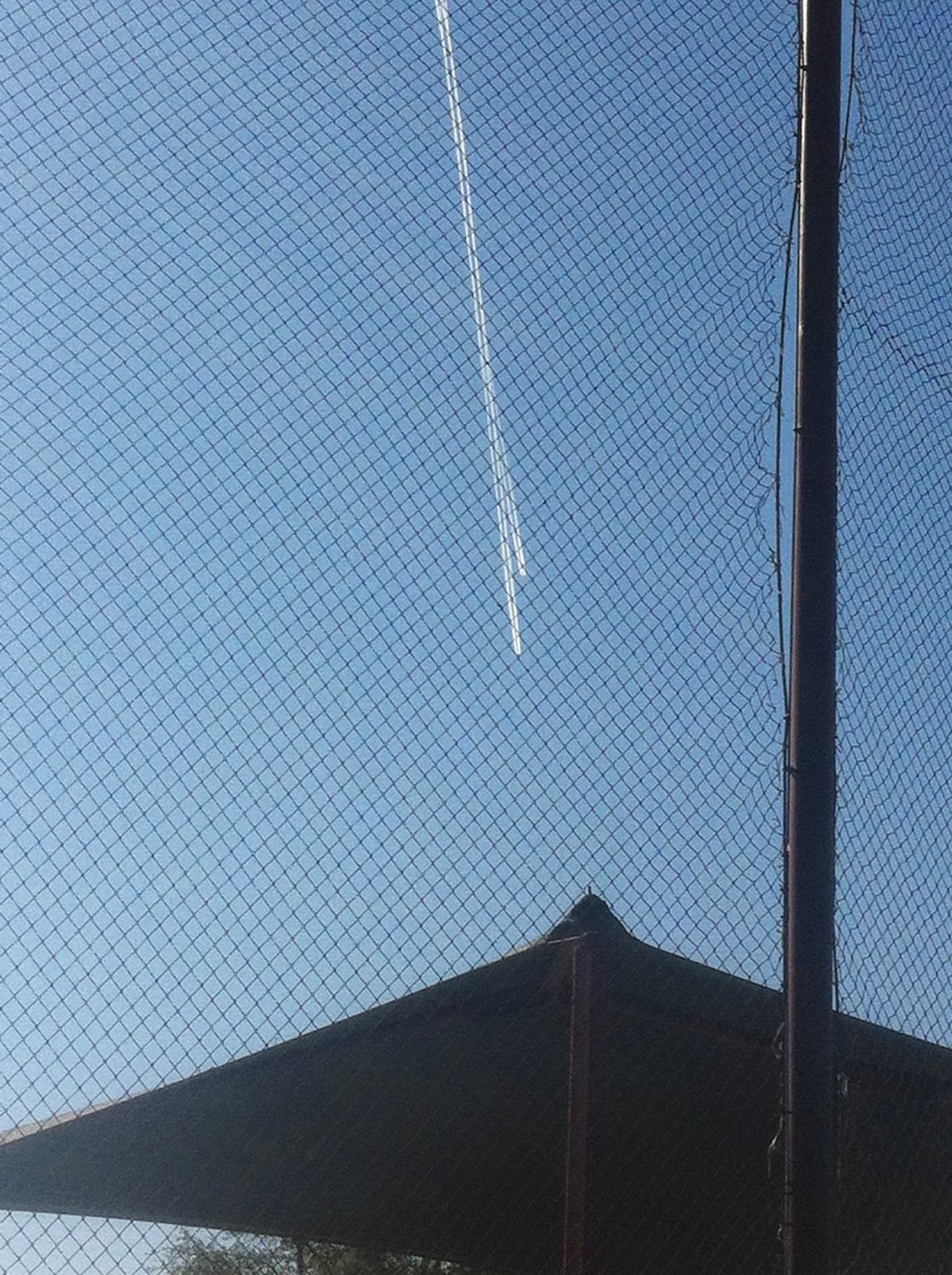 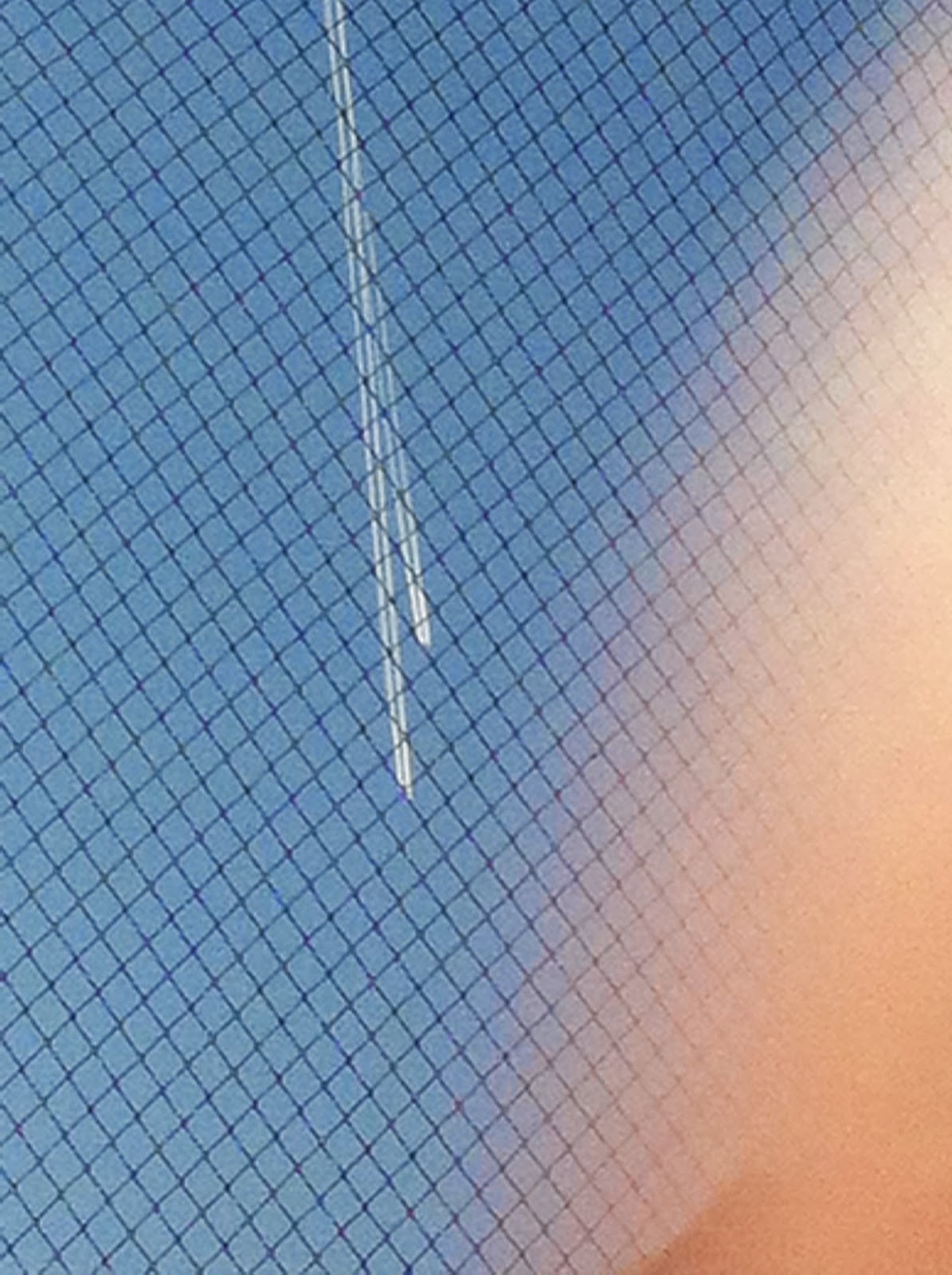 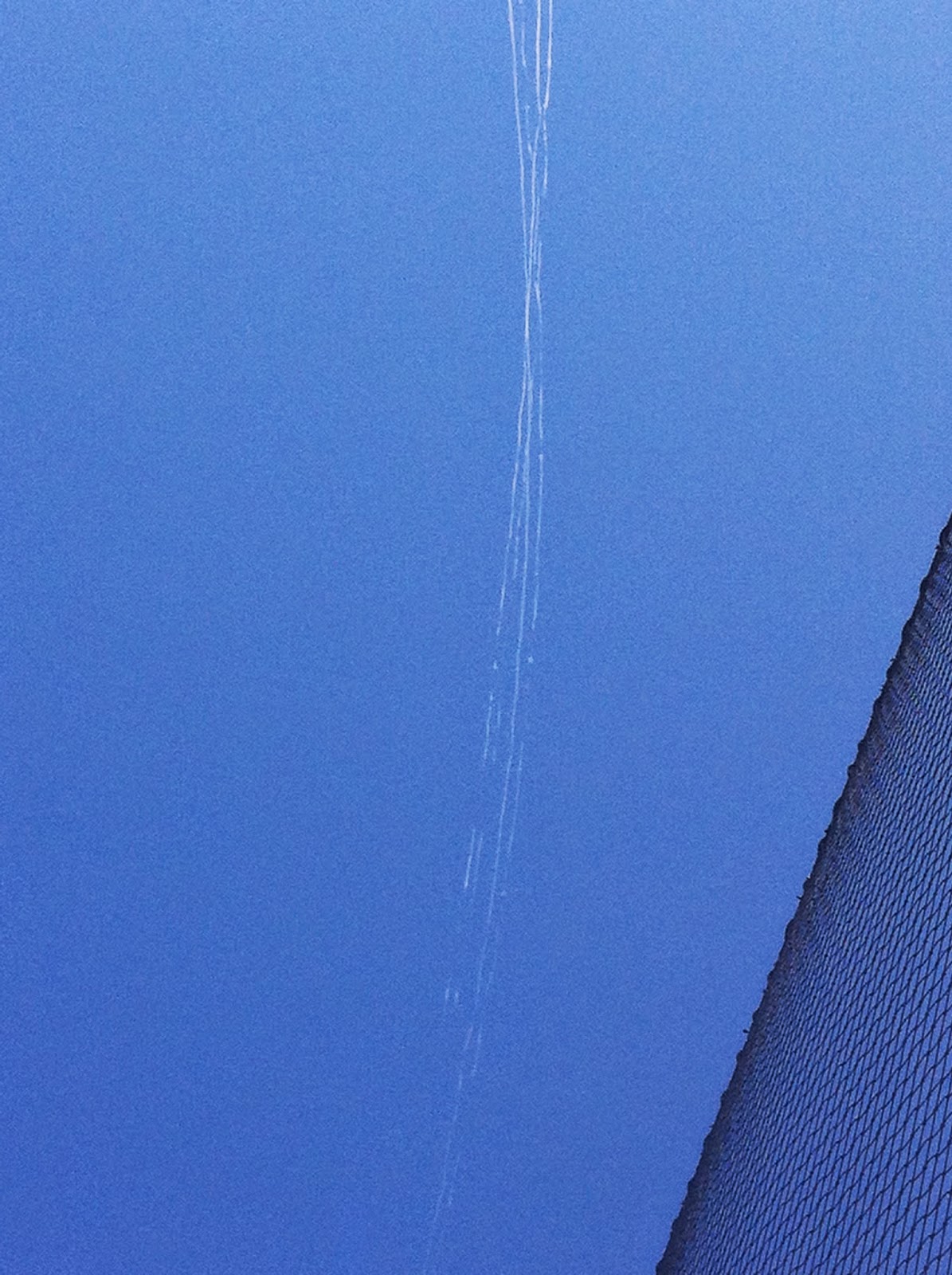 Normally B-2 pilots do everything they can to avoid making contrails, but not in this case.
According to GlobalSecurity.org:
"In 1994 the government awarded a $63.5-million [other sources report $16 million] contract to the Northrop Corporation to fine-tune stealth bombers in a number of ways. One retrofit involved the installation of "contrail management systems." Ophir, an optical sensor manufacturer in Littleton, Colorado, saved the day. Its Pilot Alert System uses lidar (light detection and ranging) to differentiate contrails from clouds and tell the pilot to change his altitude when his aircraft is "conning."
In conclusion B-2 pilots have the ability and the means to detect if they are producing a contrail. It's then just a simple matter of finding the altitude and humidity levels in the atmosphere where contrail formation can be managed.

I'll let you draw your own conclusion why the B-2s obviously wanted to be seen over West Texas on 4-8-14.

UPDATE: So let's do the math. LINK


Based on computations (for current published figures) to operate a single stealth bomber on training mission, considering fuel, maintenance, RAM upkeep, etc, it costs the American taxpayer on average $169,313.00 per hour to fly the B-2.


Considering that at least three B-2s were spotted over the Texas/New Mexico area for at least six hours, which does not account the trip back to Whiteman AFB (only loiter time over Texas) the USAF spent close to $4 million on their training sort'e, coincidentally through the same corridor that Dean, Ken and myself spotted the mystery aircraft.


If they had just given us the cash I'm sure we'd all be glad to recant and redact what we photographed.


PSS: Another REAPR flight of three B-2s flew over Amarillo today at around 3:00 PM.