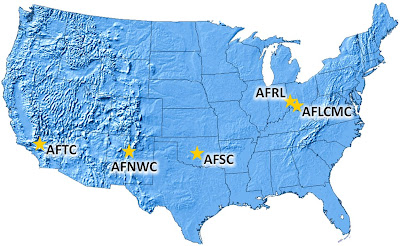 AFMC will reduce the number of its centers from 12 to five. This will cut overhead costs and redundant layers of staff and is expected to generate Air Force savings equal to $109 million annually while improving AFMC's overall management and lines of communication.

The restructure is one of many efficiency initiatives across the Air Force. With known cuts of at least $400 billion over the next five years, the Department of Defense has challenged all the services to increase funding for mission functions through efficiency savings in overhead, support and non-mission areas. In response, the Air Force identified $33.3 billion in savings over the next five years, to include savings garnered by reducing civilian workforce numbers. The restructure will allow AFMC to eliminate 1,051 civilian positions in a way that preserves mission capability.

As part of the Nov. 2 Air Force announcement on restructuring the service's civilian workforce, another 1,088 AFMC positions will be reduced as the Air Force streamlines installation support functions.

By reducing overhead costs and restructuring the way it manages the Air Force's research and development, test and evaluation, acquisition and sustainment of weapon systems and nuclear support, AFMC will provide better support to the warfighter and use taxpayer dollars more efficiently.

"We owe it to the warfighter and the American taxpayer," said Gen. Donald Hoffman, AFMC commander. "In these times of tight budgets, our success will depend on a fundamental change in culture across our command. This is an opportunity to do things better and replace a culture of perceived endless money with one of efficiency, savings and restraint."

AFMC will move away from its traditional, management-staff model, with a center and headquarters staff on each AFMC base. By creating a "lead" center for each of its five mission areas, it will streamline the way it accomplishes its work without harming its ability to perform its mission.

In addition, the restructure better integrates the command workforce. "We'll approach our business in a more integrated fashion rather than thinking separately about research, test, acquisition or sustainment in a center-by-center, base-by-base mindset. The restructure will drive us to more standardized processes," Hoffman said.

Under the new structure, the command's acquisition mission will be led by a single organization, the new Air Force Life Cycle Management Center headquartered at Wright-Patterson AFB. The AFLCMC will consolidate the missions now performed by the Aeronautical Systems Center at Wright-Patterson, the Electronic Systems Center at Hanscom AFB, Mass., and the Air Armament Center at Eglin AFB, Fla. These three acquisition workforces will report directly to AFLCMC, eliminating layers of management overhead. Also joining AFLCMC will be the new Air Force Security Assistance and Cooperation Directorate, formerly the Air Force Security Assistance Center. It will continue its foreign military sales mission from its Wright-Patterson location.

Program executive officers will remain at their respective bases and continue to report to the Under Secretary of the Air Force for Acquisition at the Pentagon. Also, the current Aerospace Sustainment Directorate program offices at Robins AFB, Ga.; Tinker AFB, Okla.; and Hill AFB, Utah, will align to a respective PEO while mission work remains at these locations.

The command's maintenance and supply mission will be led by the new Air Force Sustainment Center to be located at Tinker AFB. The AFSC will consolidate oversight of most missions now performed at the Oklahoma City Air Logistics Center at Tinker AFB; the Warner Robins ALC at Robins AFB; and the Ogden ALC at Hill AFB. Like the current acquisition centers, the three ALC headquarters will stand down and their combined workforce will report to the new AFSC. Each location will continue to operate one of the Air Force's three air depots, to be named the Oklahoma City, Warner Robins and Ogden air logistics complexes, respectively.

The command's test mission will also be consolidated. The center for test management will be the new Air Force Test Center at Edwards AFB, Calif., which is presently the Air Force Flight Test Center. The 46th Test Wing at Eglin AFB, Fla., and the Arnold Engineering and Development Center at Arnold AFB, Tenn., to be renamed the Arnold Engineering and Development Complex, will report to the AFTC, along with the 412th Test Wing, at Edwards.

The Air Force Research Laboratory, headquartered at Wright-Patterson, will continue in its role as the command's center for science, technology, research and development.

AFMC's nuclear support mission will continue to be led by the Air Force Nuclear Weapons Center at Kirtland AFB, N.M.

All centers will be led by general officers. The AFLCMC and AFSC commanders will each be a three-star general. AFRL, the AFTC and the AFNWC will each be led by a two-star.

The Air Logistics Complexes at Tinker, Robins and Hill will be led by one-star generals, as will the test wings at Eglin and Edwards. The AFSAC commander at Wright-Patterson will become a director and remain a one-star.

AFMC will use all personnel management options available to mitigate impacts on civilian employees, to include using normal attrition and early retirement and incentive opportunities.
Posted by Steve Douglass at 8:18 PM No comments: