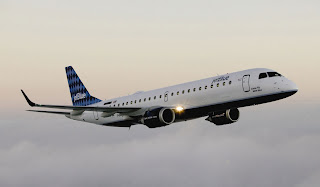 FOXNEWS: A mechanical failure sent a JetBlue plane like this one careening wildly through the skies, sparking panic among the 155 people aboard the Las Vegas to New York flight, passengers told The Post yesterday.
"It was four hours of hell," said Travis McGhie, who described how the plane kept lurching from side to side and going into steep turns when its hydraulic system failed Sunday.

"People were getting sick. Some people were throwing up. There were a lot of people getting nauseous," said another passenger, Tom Mizer.

The crew did everything they could to prevent panic. One flight attendant walked down the aisle saying: "Look at me — I’m smiling. If I was scared, you would know it. If I’m not scared, you don’t need to be," Mizer said.
There was no screaming, but "there were definitely people reacting out loud," said McGhie.
Mizer and McGhie, both Brooklyn residents, realized something was wrong as soon as the full Airbus lifted off from the Vegas airport.

"You could hear a screeching — an obvious mechanical screeching," said Mizer. "We were bouncing around a lot.”
One of the pilots declared an emergency and radioed Las Vegas controllers that they were dealing with "quite a few things, but the initial thing is . . . we’ve lost two hydraulic systems."

The plane was loaded with five hours' worth of fuel. Because the A320 is incapable of dumping excess fuel, the pilots circled the area south of the Vegas Strip until they’d burned enough to allow the crippled plane to land safely.
"People on board got a little freaked. People were upset. Nobody was crazy, but everyone was upset. It became a long, sort of very tense waiting game," Mizer said.

McGhie added, "The plane kind of felt out of control. It wasn’t able to balance itself, and the air was choppy," said McGhie.

Posted by Steve Douglass at 6:53 AM No comments: