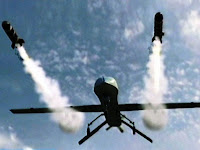 (CNN) -- The son of U.S.-born militant cleric Anwar Al-Awlaki was among those killed in a trio of drone attacks in southern Yemen on Friday night, a security official said.

The attacks, carried out in the Shabwa district, killed seven suspected militants, the defense ministry said. It would not confirm that Abdul Rahman Anwar Awlaki was among them.
The senior security official in Shabwa, who did not want to be named because he is not authorized to speak to the media, said the younger Awlaki had been hiding in the mountains of Shabwa for more than eight months. He had first-hand knowledge of the death, he said.
The Awlaki family did not want to comment.

On September 30, a U.S. drone strike killed Anwar al-Awlaki, a U.S.-born miltant cleric who was a key leader of the terrorist group al Qaeda in the Arabian Peninsula (AQAP).
President Barack Obama hailed that death as a "major blow" for the terror group.