(CNN) -- The pilot of a high-performance biplane died Saturday afternoon when his aircraft crashed at an air show in Kansas City, Missouri, officials said.

The plane was doing maneuvers around 1:45 p.m. CT (2:45 p.m. ET) when it crashed into grass near a runway at the Charles B. Wheeler Downtown Airport, said Joe McBride, spokesman for the Kansas City Aviation Department.

Footage from CNN affiliate KMBC showed smoke and flames rising from the site. KMBC 9's Cliff Judy said he saw the scene from a distance and that the plane had been doing aerial stunts when it dipped below the tree line.

Air show director Ed Noyallis identified the victim as Bryan Jensen, who grew up in Iowa and flies for Delta Air Lines.

According to the show's website, Jensen piloted the "Beast," described as "a one of a kind aircraft."

The Kansas City Aviation Expo Air Show was closed for the remainder of the day. It will reopen Sunday, officials said.

Investigators from the National Transportation Safety Board and the Federal Aviation Administration were on site.

The public was never in any danger, Noyallis told reporters.
Posted by Steve Douglass at 6:08 PM No comments: 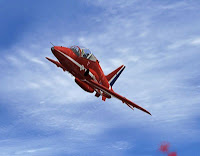 BOURNEMOUTH, England, Aug. 20 (UPI) -- A member of the elite Red Arrow stunt flying team was killed in a crash Saturday at an airshow in southern England, the British Ministry of Defense said.

"A gifted aviator, he was chosen to fly in the Red 4 slot, on the right hand outside of the famous Diamond Nine formation -- an accolade in itself being the most demanding position allocated to a first-year pilot," Blake said.

The Red Arrows were performing at the Bournemouth Air Festival, which was scheduled to end Sunday. The team had completed a flawless series of acrobatics when one plane vanished, the Bournemouth Echo reported.

Witnesses described the rest of the team waiting on the tarmac at Bournemouth Airport for the ninth plane to land.

The plane crashed in the village of Throop.