LINK: The Interceptors Club
Posted by Steve Douglass at 7:39 PM No comments:

Saudis May Let Israeli Jets Fly Over For Iran Raids 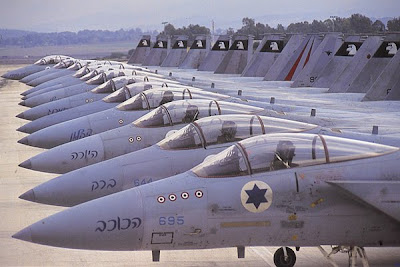 LONDON - Saudi Arabia has conducted tests to stand down its air defenses to allow Israeli warplanes to use its airspace in any bombing raid on Iran's nuclear facilities, The Times of London reported June 12.

"The Saudis have given their permission for the Israelis to pass over and they will look the other way," a U.S. defense source in the region told the paper.

"They have already done tests to make sure their own jets aren't scrambled and no one gets shot down. This has all been done with the agreement of the [U.S.] State Department."

"Saudi Arabia has followed the false and slanderous allegations reported by some British media that it would let Israel attack Iran via its airspace," SPA quoted a foreign ministry official as saying.

The kingdom "rejects violating its sovereignty or the use of its airspace or territories by anyone to attack any country," the unidentified official said, noting that Saudi Arabia does not have diplomatic ties with Israel.

Israel, which regards Iran as its principal threat, has refused to rule out using military action to prevent Tehran developing nuclear weapons. Iran says its nuclear program is aimed solely at power generation.

The Times said Riyadh, which views Iran as a regional threat, had agreed to allow Israel to use a narrow corridor of its airspace in the north of the country to shorten the distance in the event of any bombing raid on Iran.

It said that a source in Saudi Arabia said the arrangement was common knowledge within defense circles in the kingdom.

"We all know this. We will let them [the Israelis] through and see nothing," the source told The Times.
Posted by Steve Douglass at 12:13 PM No comments: