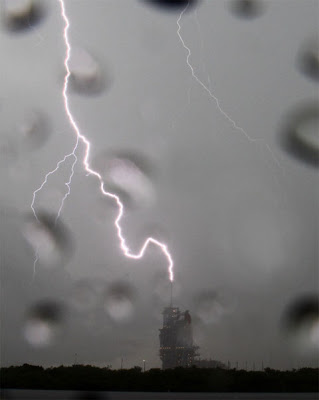 Lightning from a severe thunderstorm that rolled over the Kennedy Space Center on Friday, July 10 caused NASA to postpone the launch of space shuttle Endeavour, originally planned for Saturday, to allow engineers additional time to ensure the strikes at pad 39A didn't harm onboard systems.

This gallery of images from a camera positioned near the pad to capture the launch caught the dramatic lightning show. 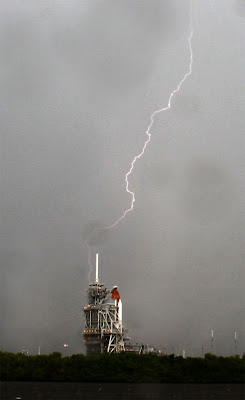 Posted by Steve Douglass at 8:44 PM No comments:

KENNEDY SPACE CENTER -- Engineering analysis teams are expected to work through Saturday night to analyze the data from July 10 lightning strikes that forced a launch scrub of the space shuttle Endeavour.

'There is no indication that there is any damage,' said NASA spokesman Allard Beutel. 'Mission management is being extra cautious.'

Managers will meet at 8 a.m. EDT Sunday to review the data from the overnight analysis, Beutel said. The decision will be made then whether to scrub or continue with the planned launch at 7:13 p.m. EDT. The meeting will roll into the standard meeting on whether to fill the external tank with liquid oxygen and liquid hydrogen.

A final decision whether to proceed with the launch, based on the engineering analysis and favorable weather conditions for tanking, will be made by about 9:30 a.m. EDT.

Beutel noted that mission management decided to scrub Saturday's launch to give engineering teams more time to analyze the data from the seven lightning strikes.

'There was not enough time between the strikes and tanking today to analyze all the data,' he said.

In September 2006, STS-115 was delayed by several days by a single large lightning strike, which also resulted in a voltage surge past the 100 volt threshold engineers think acceptable. 'We had different analytical tools then, so it took longer to determine if it was safe to proceed,' Beutel said.

Conditions are better a launch Sunday, with a 60% chance of the weather being favorable compared with 40% for today's scrubbed launch.

NASA can go as late as Tuesday with the launch before running into a conflict at the International Space Station with a planned Russian launch of a Progress resupply capsule. That launch could be delayed to give Endeavour more time to complete its mission, but no formal discussions have yet occurred between NASA and Russian officials. That will happen if Endeavour fails to launch by Monday, Beutel said.'

Posted by Steve Douglass at 8:23 PM No comments: 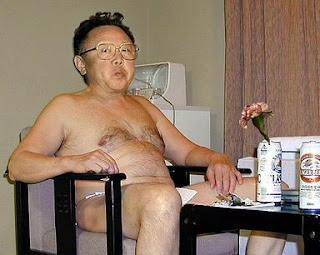 Service has also pointed to a North Korean boast last month that it was ‘fully ready for any form of high-tech war.’The spy agency told lawmakers Friday that a research institute affiliated with the North’s Ministry of People’s Armed Forces received an order to ‘destroy the South Korean puppet communications networks in an instant,’ the mass-circulation JoongAng Ilbo newspaper reported.The paper, citing unidentified members of parliament’s intelligence committee, said the institute, known as Lab 110, specializes in hacking and spreading malicious programs.

The report, quoting an unidentified senior ruling party official, said the North Korean institute is affiliated with the North Korean People’s Army.The state-run Korea Communications Commission said Friday that it had identified and blocked five Internet Protocol, or IP, addresses in five countries used to distribute computer viruses that caused the wave of Web site outages, which began in the U.S. on July 4.The addresses point to the computers that distributed the virus that triggered so-called denial of service attacks in which floods of computers try to connect to a single site at the same time, overwhelming the server.

They were in Austria, Georgia, Germany, South Korea and the U.S., a commission official said. He spoke on condition of anonymity because he is not authorized to speak to the media on the record.Speculation over who was responsible for the attacks that targeted high-profile Web sites, including those of the White House and South Korea’s presidential Blue House, has centered on North Korea.And though such finger-pointing has been trickling out since the attacks began, the identity of the IP addresses themselves provides little in the way of clarity.That’s because it is likely the hackers, whoever they are, used the addresses to disguise themselves — for instance, by accessing the computers from a remote location. IP addresses can also be faked or masked, hiding their true location.South Korean media reported in May that North Korea was running an Internet warfare unit that tries to hack into American and South Korean military networks to gather confidential information and disrupt service.

The Chosun Ilbo newspaper reported Friday that the North has between 500-1,000 hacking specialists.The fact that some of the attacked sites — such as the ruling party and the office of President Lee Myung-bak — have links to the South Korean government’s hard-line policies toward the North was cited as further reason why Pyongyang might attack them.The North has drawn repeated international rebuke in recent months for threats and actions seen as provocative by the international community. Those include a nuclear test in May and short-range ballistic missile launches on July 4.North Korea has not responded to the allegations of its involvement in the Web site outages.The assaults appear to be on the wane. No new similar cyberattacks have been reported in South Korea since Friday evening, according to the state-run Korea Information Security Agency."

Guard F-15s, F-16s duel in skies over Montana: "Montana Air National Guard pilots built a good relationship with their Iowa Air National Guard counterparts in spring 2008, when the units deployed together to Iraq, both flying F-16s.Now they are engaged in two weeks of friendly combat training above the military operating area near Highwood. The exercise started Thursday and will continue through July 23, with as many as 10 aircraft in the sky at once.This time around, the Montana guard is flying the larger two-engine F-15 fighter jet against the Iowa Guard’s lighter, somewhat more maneuverable one-engine F-16.In fact, the difference in aircraft is the key point to the training exercise, called ‘dissimilar air-combat training,’ or DACT.‘It’s a big opportunity for us to do training competition with planes we don’t usually fly against,’ said Capt. Shawn Tapps, a pilot and scheduler with the Iowa guard. ‘At home, we usually train against other F-16s, and that’s not realistic combat experience. In real wartime, you’d fly against planes different than your own. The exercise gives us the opportunity to visualize while we’re flying what to do against a plane of different size and capabilities.’Lt. Col. Mike Buck, the Montana guard’s fighter squadron commander, agreed.Because the F-15 is an air-combat specialist designed to fight off more than one enemy plane, the Montana guard’s jets will be outnumbered by the Iowa guard’s F-16s during most of the exercises, he said.The Montana guard pilots are in an unusual situation. They flew F-16s for years and are relative newcomers behind the stick of the F-15s.Buck said he flew the F-16 for 18 years, but has been training with the F-15 during the past year. The Montana Air National Guard flew the F-16 for more than two decades before beginning its conversion to the F-15 in August.‘I’ve got 3,000 hours in the F-16, versus a whopping 65 hours in the F-15,’ he joked. ‘That gives me the knowledge of what to expect from the Iowa F-16 planes, if I can push my new F-15 skills to a high enough level.’Buck and Tapps contrasted the planes.Designed for shooting down enemy aircraft, the F-15 has far-reaching radar and carries twice as many missiles as the F-16, Buck said.The F-16 originally was designed to fly low and bomb enemy targets on land, Tapps said, but it has the versatility to fight air-to-air battles, too.Though bigger, the F-15 can maneuver almost as well as the F-16, especially at lower speeds, Buck said, ‘but that depends on the pilot’s stick and rudder skills and finesse.’During the DACT, the pilots will strut their planes’ stuff through mock air combat.‘The planes may start tens of miles apart and progress as close as 500 feet, at air speeds ranging from close to 1,000 mph to as slow as 150 mph,’ Buck said.Computer displays within the aircraft will project whether a missile would hit the rival plane if it were fired, depending on that plane’s maneuver. When a hit is projected, the ‘struck’ plane is told by radio to leave the scene.Sure, there’s a good-natured rivalry for bragging rights, both men said, but the exercise is mostly about training.Through the DACT, the Iowa guard is providing additional planes during training exercises that the Montana guard needs to be certified as a mission-ready wing, Buck said. With continued hard training, the Montana guard unit expects to be combat operational by about this time next year.Buck said both units benefit from the DACT training, noting the Iowa unit gets to fly ‘in our enormous, unmolested Big Sky air space.’Tapps readily agreed.‘Montana’s air space is phenomenal, unrestricted and huge,’ he said. ‘It allows for very lively, robust competition.’"

This is a vehicle that, under its own power and remote control, demonstrated it could use a pair of flapping wings for both propulsion and flight control, climbing, descending and flying forwards, backwards and sidewards in the hover.

The next step gets tougher, AV has to shrink the vehicle's size and weight, extend its endurance and demonstrate transition between vertical and forward flight and back again. The prototype NAV'is to'be small enough to sit in the operator's hand and will closely resemble its biological inspiration, the hummingbird.