B-21 Raider on fast track to IOC 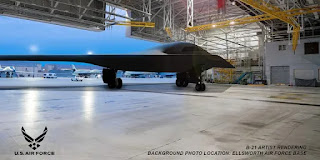 BREAKING DEFENSE WASHINGTON: The novel requirements and acquisition processes being used to develop the B-21 bomber will slash the time it will take to get the Raider to initial operating capability (IOC), Air Force Global Strike Commander Gen. Timothy Ray says.

In a wide ranging interview with Mitchell Institute Dean David Deptula today, Ray also revealed that the Air-Launched Rapid Response Weapon (ARRW) hypersonic missile being developed for the conventional bomber fleet will undertake another flight test next month, after failing the first flight test of its booster in April.

As one example of how the new approach is speeding B-21 development, Ray told the Mitchell Institute today he expects integrating the AGM-158/B Joint Air-to-Surface Standoff Missile — Extended Range (JASSM-ER) onto the B-21 will be a breeze compared to what it took to fit the B-2 with the ground attack cruise missile.

“I think it will take me about one tenth of the time to put the JASSM-ER on the B-21 than it did the B-2. A tenth of the time,” he said, with obvious pride. Ray noted that the program has been praised by Adam Smith, chairman of the House Armed Services Committee, who is notorious for his sometimes scathing criticism of weapon systems suffering cost/schedule overruns, such as the F-35 Joint Strike Fighter.

One key factor in this success is the fact that Air Force Global Strike Command has been in essence granted pre-approval to integrate new subsystems, so it doesn’t need to go back through the Pentagon’s complex requirements process each time, Ray explained.

“The Joint Requirements Oversight Council has agreed that we don’t need to come back to ask for a new radio, or new weapon or new sensor, or new defensive system — it’s part of the bomber,” Ray said.

The other enabler is the digital design and engineering approach being used by the service and prime contractor Northrop Grumman — an approach that as Ray noted also is being taken with development of the Ground Based Strategic Deterrent.
Posted by Steve Douglass at 8:58 AM No comments: