The five detainees at Guantánamo Bay charged with planning the Sept. 11, 2001, terrorist attacks have filed a document with the military commission at the United States naval base there expressing pride at their accomplishment and accepting full responsibility for the killing of nearly 3,000 people.

The document, which may be released publicly on Tuesday, uses the Arabic term for a consultative assembly in describing the five men as the “9/11 Shura Council,” and it says their actions were an offering to God, according to excerpts of the document that were read to a reporter by a government official who was not authorized to discuss it publicly.

The document is titled “The Islamic Response to the Government’s Nine Accusations,” the military judge at the Guantánamo Bay detention camp said in a separate filing, obtained by The New York Times, that describes the detainees’ document.

The document was filed on behalf of the five men, including Khalid Shaikh Mohammed, who has described himself as the mastermind of the Sept. 11 attacks.

President Obama halted the military proceedings at Guantánamo in the first days after his inauguration, and the five men’s case is on hiatus until the government decides how it will proceed.

Several of the men have earlier said in military commission proceedings at Guantánamo that they planned the 2001 attacks and that they sought martyrdom. The strategic goal of the five men in making the new filing, which reached the military court on March 5, was not clear.

In their filing, the men describe the planning of the Sept. 11 attacks and the killing of Americans as a model of Islamic action, and say the American government’s accusations cause them no shame, according to the excerpts read by the government official.

“To us,” the official continued reading, “they are not accusations. To us they are a badge of honor, which we carry with honor.”

It appears that the men wrote the document at meetings they are permitted to conduct periodically at the detention camp without lawyers.

In his brief court order describing the filing, the military judge who has been handling the case, Col. Stephen R. Henley of the Army, said the men sought no specific legal action. Judge Henley ordered that the filing be released immediately, but officials said objections from lawyers for two of the men had held up release Monday.

All five of the men have said they want to represent themselves, but in the case of these two men, Ramzi bin al-Shibh and Mustafa Ahmed al-Hawsawi, the military judge had not yet determined their competency when the proceedings were halted.
Posted by Steve Douglass at 7:38 PM No comments:

A newly leaked military document appears to show the Pentagon knowingly exposed US troops to toxic chemicals that cause cancer, while publicly downplaying the risks exposure might cause.

The document, written by an environmental engineering flight commander in December of 2006 and posted on Wikileaks (PDF) on Tuesday, details the risks posed to US troops in Iraq by burning garbage at a US airbase. It enumerates myriad risks posed by the practice and identifies various carcinogens released by incinerating waste in open-air pits.

Because of the difficulties in testing samples, investigators could not prove that chemicals exceeded military exposure guidelines. But a military document released last December found that chemicals routinely exceeded safe levels by twice to six times.

The leaked report was signed off by the chief for the Air Force's aeromedical services. Its subject is Balad Airbase, a large US military base about 70 kilometers north of Baghdad.

"In my professional opinion, the known carcinogens and respiratory sensitizers released into the atmosphere by the burn pit present both an acute and a chronic health hazard to our troops and the local population," Aeromedical chief Lt. Colonel James Elliott wrote.

According to the document, a US Army Center for Health Promotion and Preventative Medicine investigator said Balad's burn pit was "the worst environmental site I have ever personally visited," including "10 years working... clean-up for the Army."

Threatening words from N. Korea: "SEOUL, South Korea — North Korea put its armed forces on standby Monday and threatened retaliation against anyone seeking to stop it from firing what regional powers fear will be a missile in the latest barrage of threats from the communist regime."

Posted by Steve Douglass at 11:36 AM No comments:

Switchblade: Not a UAV to Mess With

Switchblade: Not a UAV to Mess With: "

AeroVironment says it has conducted an 'end-to-end demonstration' of its Switchblade lethal mini-UAV. As demonstrated, the battery-powered Switchblade is a backpackable UAV that is launched from a tube, unfolds its tandem wings, and sends back streaming video from an electro-optical sensor.

But when a target is detected, the operator designates it on the hand-held controller, the 2lb Switchblade folds its wings back under the fuselage and becomes a weapon, autonomously guided by video tracker on to the target, exploding the small warhead.

AeroVironment doesn't have any orders yet for the Switchblade, but in its third-quarter analysts' call on Mar. 9 the company said two new customers have funded demonstrations of different applications of the UAV. The back-packed tube-launched demo just completed was funded by the U.S. Air Force Research Laboratory.

The small-UAV specialist seems confident of selling the Switchblade and thinks it could get from contract to production in about 18 months. Switchblade is one of several UAVs under development at AeroVironment. They include a DARPA-funded version of the Wasp micro-UAV that can takeoff and land vertically, hover and 'perch and stare'. Likely the inspiration for this cartoon from company presentation...

Posted by Steve Douglass at 11:36 AM No comments: 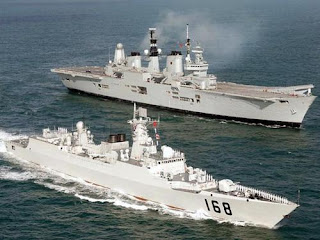 By Hans M. Kristensen
The incident that unfolded in the South China Sea Sunday, where the U.S. Navy says five Chinese ships harassed the U.S. submarine surveillance vessel USNS Impeccable, appears to be part of a wider and dangerous cat and mouse game between U.S. and Chinese submarines and their hunters.

News media reports cite Pentagon reports of half a dozen other incidents just within the past week in which U.S. surveillance vessels were “subjected to aggressive behavior, including dozens of fly-bys by Chinese Y-12 maritime surveillance aircraft.”

The latest incident allegedly occurred in international waters only 75 miles south of a budding naval base near Yulin on Hainan Island from where China has started operating new nuclear attack and ballistic missile submarines. The U.S. Navy on its part is busy collecting data on the submarines and seafloor to improve its ability to detect the submarines in peacetime and more efficiently hunt them in case of war.


The USNS Impeccable was designed specifically as a platform for the SURTASS towed array and its Low Frequency Array upgrade.

The U.S. Navy’s description of the incident states that “a civilian crew mans the ship, which operates under the auspices of the Military Sealift Command.” Yet as one of five ocean surveillance ships, the USNS Impeccable (T-AGOS 23) has the important military mission of using it array of both passive and active low frequency sonar arrays to detect and track submarines. The USNS Impeccable works directly with the Navy’s fleets, and in 2007 operated with the three-carrier strike battle group in Valiant Shield 07 exercise in the Western Pacific.

USNS Impeccable is equipped with the Surveillance Towed Array Sensor System (SURTASS), a passive linear underwater surveillance array attached to a tow cable. SURTASS was developed as a floating submarine detection system for deep waters, and the Navy wants to add an active Low Frequency Array (LFA) to improve long-range detection of submarines in shallow waters.


The SURTASS LFA passive-active surveillance system is designed to detect submarines and surface ships at long range in deep and shallow waters.
.
Indeed, according to the U.S. Navy, the USNS Impeccable is “designed specifically as a platform for the SURTASS towed array and its LFA adjunct.”

Among Chinese submarines the USNS Impeccable was monitoring is probably the Shang-class (Type-093) nuclear-powered attack submarine, a new class China is building to replace the old Han-class, and which has recently been seen at the Yulin base.


Two new Shang-class (Type-093) were photographed at the naval base near Yulin on Hainan Island in mid-September 2008, the first time two Shang-class SSNs are known to have been present at the same time.
.
An earlier image from February 2008 showed a Jin-class (Type-094) ballistic missile submarine at the Hainan base for the first time. The Jin-class is not visible on the later image. China has been reducing its submarine fleet by replacing old boats with fewer modern ones. The submarines normally stay close to shore, but in 2008 sailed on 12 longer patrols – twice as many as in 2007.

Time For an Incident Agreement

The incident begs the question who or at what level in the Chinese government the harassment in international waters was ordered. The incident will make life harder for those in the Obama administration who want to ease the military pressure on U.S.-Chinese relations, and easier for hardliners to argue their case.

For both countries the Sunday incident and the many other incidents that have occurred recently are reminders that the time is long overdue for an agreement to regulate military operations. Following a break in response to U.S. military sales to Taiwan, U.S.-Chinese mid-level military-to-military talks were scheduled to resume last month, and the Commander of U.S. Pacific Command, Admiral Timothy Keating, said “nas
Posted by Steve Douglass at 9:37 AM No comments:

Engine debris caused F-16 crash at Balad: "The runway crash of an F-16 Fighting Falcon at Joint Base Balad in Iraq last November was caused by an engine fire that started when a piece of debris punctured a fuel tank, according to an Air Combat Command investigation released Monday."

Posted by Steve Douglass at 5:14 AM No comments:

Posted by Steve Douglass at 5:14 AM No comments: