By Mike Mount CNN:
Air Force investigators believe a specialized flight suit could be partially responsible for some pilots experiencing a lack of oxygen while flying the F-22 fighter jet, according to a report by Air Force investigators.
Investigators are focusing on part of the suit, called the "Combat Edge," which hampers breathing and causes oxygen loss when combined with a physiological condition that collapses air sacs in the lungs, according to details of the report that were shared with Security Clearance.
The findings are expected to be part of the first monthly update by Air Force investigators to Secretary of Defense Leon Panetta to be delivered later this week or early next week, according to sources familiar with the investigation.
Last month, Panetta ordered the updates on the investigation after the Air Force could not identify the cause of the continued issues with pilots complaining about coming close to passing out while flying the plane, which the service called "hypoxia-like symptoms."
Combat Edge is a vest-like garment that expands and contracts on a pilot's torso to fight the effects of severe G-forces experienced while flying the F-22. The problem being looked at is that the garment may restrict the pilots' breathing beyond what is intended, according to sources familiar with the report.
Another possible problem for pilots, the report is expected to say, is a condition called acceleration atelectasis, which causes a pilot's lungs to not effectively deliver oxygen to the bloodstream. The condition for F-22 pilots is caused when extreme gravity and breathing almost pure oxygen in the F-22 cockpit partially collapse air sacs in the lungs, according to the sources.
Acceleration atelectasis causes a heavy cough, which F-22 pilots have called the "Raptor cough" after the nickname of the fighter, "Raptor."
Pilots have complained about the cough in connection with the hypoxia-like conditions as they fly the F-22, the most technologically advanced plane in history, often at altitudes much higher than regular aircraft fly. The pilots also perform maneuvers that put their bodies through extreme conditions.
In an e-mail response to questions by Security Clearance, Air Force spokesman Lt. Col. John Dorrian said, "Recent testing has identified some vulnerability and reliability issues in the upper pressure garment worn by F-22 pilots. Air Combat Command has directed pilots to remove the upper pressure garment during routine flight operations, and Air Force officials are developing a fix to overcome the identified issues."
The findings in the update report to be given to Panetta are not final, according to the sources. Air Force officials say investigators are narrowing down the cause of the problem, which has intermittently plagued the aircraft since 2008.The problem compounded in September 2011 as more pilots complained of experiencing the symptoms.
The Combat Edge problem does not explain why some mechanics have also suffered from hypoxia while working on the planes on the ground.
The fleet was grounded in May 2011 so the service could check the hypoxia reports, but the order was lifted in September under a "return to fly" plan, with equipment modifications and new rules including daily inspections of the life-support systems.
Investigators initially pointed to an onboard oxygen generating system that pilots used to breathe as a possible cause.
Lockheed Martin, the maker of the jet, was given a $19 million contract to install a backup oxygen system in the F-22 last week.
Last month, Panetta mandated that all F-22 flights "remain within the proximity of potential landing locations" to ensure the ability to recover and land should a pilot run into "unanticipated physiological conditions."
Posted by Steve Douglass at 6:40 AM No comments: 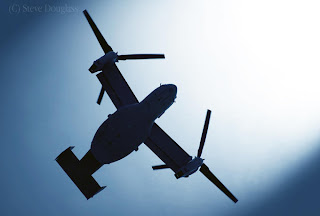 HURLBURT FIELD, Fla. (WALA) - Officials say five crew members aboard an Air Force CV-22 Osprey that crashed Wednesday evening on the Eglin Range, north of Navarre, Fla., were taken to local area hospitals.
Officials say two of the crew members were taken by ambulance, while the other three were transported by air.
The extent of their injuries is unknown at this time.
The Air Force CV-22 Osprey, assigned to the 1st Special Operations Wing, crashed at about 6:45 p.m. Wednesday.
Officials say the mishap occurred during a routine training mission, and first responders are currently on the scene.
A board of officials will convene to investigate the accident.
More information will be released as it becomes available.
Posted by Steve Douglass at 5:00 AM No comments: