PARACHINAR, Pakistan -- U.S. drones fired four missiles at a compound of a Pakistani militant commander in a northwestern tribal region on Thursday, killing 16 militants, while a pair of bombings in another part of the country killed 10 civilians and three security personnel, officials said. 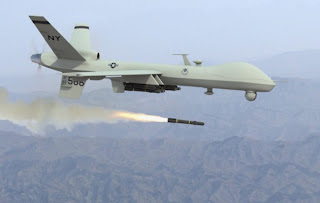 A government administrator in Orakzai region, Salim Khan, said 12 insurgents were also wounded in the drone attack near Biland village bordering the North Waziristan tribal region. Three Pakistani intelligence officials said the dead and wounded men were fighters loyal to militant commander Hafiz Gul Bahadur, who is based in North Waziristan.
The officials spoke on condition of anonymity as they were not authorized to brief reporters on the record.
Although U.S. authorities often target militant hideouts in the country's North and South Waziristan tribal regions bordering Afghanistan, such strikes in other tribal regions like Orakzai are rare. The U.S. rarely discusses the unmanned drone strikes, which are part of a covert CIA program.
The strikes are extremely contentious in Pakistan, where many consider them an affront to Pakistani sovereignty. They also say the strikes kill innocent civilians, which the U.S. denies.
The Pakistani government protested to the U.S. Embassy in Islamabad about Thursday's drone strikes as well as another on Wednesday in which five people were killed.
"The embassy was informed that drone strikes on Pakistani territory were a clear violation of international law and Pakistan's sovereignty. These attacks were unacceptable to Pakistan," the Foreign Ministry said in a statement.
Washington says the strikes are an important part of battling militants in the tribal areas, where Pakistan has been unable or unwilling to do so.
The latest drone attack came hours after a bomb at a crowded market in Pakistan's restive southwestern province of Baluchistan killed 10 people. A roadside bombing elsewhere in the troubled region killed three security officials, police said.
No one immediately claimed responsibility for the bombings, but nationalists in Baluchistan have long waged a low-level insurgency to pressure the government to increase the local share of funds from resources such as natural gas that are extracted from the province.
Islamist militants, including the al-Qaida affiliated group Lashkar-e-Jhangvi, also operate in Baluchistan.
The market bombing Thursday took place in the town of Sibi in Baluchistan, and it also wounded 24 people, said senior police officer, Ghulam Aali Lashari.
Lashari said the blast destroyed several shops in the town, about 150 kilometers (90 miles) east of Quetta, the provincial capital.
Hours later, a roadside bomb struck a vehicle carrying security officers in the southwestern town of Dera Bugti. That attack killed three officers and wounded two, said police officer Shehbaz Khan.
Also Thursday, gunmen kidnapped a retired Pakistani army brigadier who was working under contract with the country's intelligence agency, the Inter-Services Intelligence. The abduction took place on the outskirts of the capital, Islamabad, shortly after the officer left his home for work, said a police and a security official.
The officer's driver resisted and was shot and killed, said the two officials, who both spoke on condition anonymity because they were not authorized to discuss sensitive issues with reporters. They requested that the kidnapped officer's name be withheld because his safety could be compromised if it were disclosed.
One of the officials said the officer was working on a counterterrorism assignment but would not disclose the exact nature of the mission.
Associated Press Writers Asif Shehzad in Islamabad, Rasool Dawar in Peshawar and Abdul Sattar in Quetta contributed to this report.
Posted by Steve Douglass at 8:31 PM 1 comment: