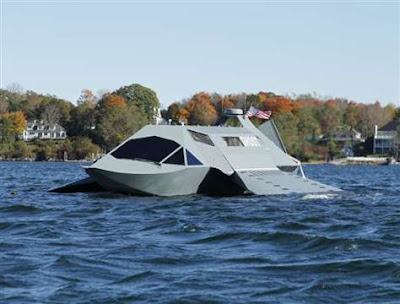 
A new kind of boat is designed to move quickly and stealthily through water by generating a layer of gas around its underwater surfaces.
The design reduces friction by a factor of 900, according to the New Hampshire company that produced the boat. Its smooth speed makes it ideal for special operations. It could also revolutionize shipping.

Juliet Marine recently unveiled the Ghost, a ship it says can reach speeds of up to 60 miles per hour. The shape of the craft is similar to earlier attempts at making watercraft less visible to radar — notably the Navy's "Sea Shadow" project of the 1980s.

Gregory Sancoff, president and chief executive officer of Juliet Marine, says this boat is a quantum leap beyond those early designs. "The Sea Shadow was an 11-knot craft," he said. "This is much faster."

Sancoff isn't willing to go into too much technical detail, partly because the U.S. government is interested and the company is working with a defense contractor to build a 150-foot model. He can say that the double-hulled boat generates and surrounds itself with a layer of gas, reducing friction and boosting its speed.

The phenomenon is called supercavitation. Supercavitation occurs when a projectile moving through water generates a low-pressure zone around its surface. Go fast enough and the low-pressure zone becomes a layer of gas. In that respect the Ghost is similar to a Russian-made torpedo (called the "Shkval," or squall), though the underwater portion of the boat's twin hulls are a new design.

The task of making a ship less visible to radar is physically the same as what is done with an airplane — the idea is to make the radar waves bounce off, just not back toward the sender. Jan Brink, an electromagnetic compatibility specialist at Kockums, a Swedish company that designed and built the Visby-class stealth ships for that country's navy, says the shape of a ship has to account for radar coming from above, whereas an airplane has to deal with radar from below.

"For us on a ship looking to reduce radar cross section, it's a radar beam from another ship or radar from a missile," he said.

The Ghost is designed for missions close to coasts, such as getting special operations teams into and out of areas quickly. Another possible mission would be dealing with pirates and "swarm" attacks on aircraft carriers and destroyers. Sancoff says the speed of the Ghost makes it useful against smaller boats that can outrun and outmaneuver larger ones. Contrary to popular belief, aircraft carriers and destroyers carry little in the way of defensive guns.

The 2000 suicide attack on the USS Cole in Yemen was accomplished with a small boat that simply ran into its side.

"Right now we have thousands of sailors whose only defense against high-speed craft is a .50 caliber machine gun from World War II," Sancoff said.
Eric Wertheim, analyst at the U.S. Naval Institute, says the big issue for a boat like the Ghost will be identifying its niche within the military.

"This is a tough budget time to be introducing any technology that isn't being specifically called for by the Navy," he said. "For the last 100 years the stealth boat has been the submarine," he said. Submarines can do special ops missions too, as demonstrated by the fact that smugglers have recently made good use of them. "You have to answer the question of what is the need not being met," he said.

READ THE REST OF THE STORY HERE
Posted by Steve Douglass at 3:39 PM