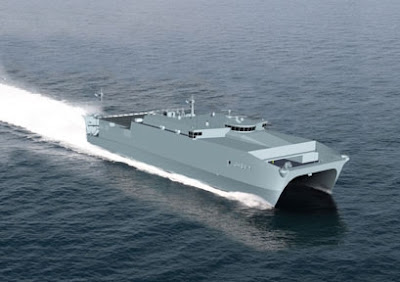 The U.S. Navy will christen on Saturday a catamaran-style cargo ship that can zip through shallow waters at speeds up to 40 miles per hour, loaded down with 1.2 million pounds worth of gear.

The joint high speed vessel, named Spearhead, is the first of ten 338-foot-long aluminum dual-hull boats that are being constructed by Austral USA in Mobile, Ala., as part of a contract worth a reported $1.6 billion.

The company is also under a $3.5 billion contract to build ten trimaran Littoral Combat Ships, which can cruise at more than 45 miles per hour.

This need for speed stems from a desire for ships to operate in near-shore environments in the post Cold-War era, explained Loren Thompson, a defense analyst and chief operating officer at the Lexington Institute in Arlington, Virginia.

"The Navy decided that its future was going to be mainly about influencing
developments ashore," he told me Thursday. "It therefore started thinking about what sorts of vessels could survive close to shore and the conclusion it came to was speed mattered a lot."

Fast ships, for example, can outrun enemy warships and torpedoes, and the nimble agility of these new boats also allow quick maneuvers to dodge other types of dangers, Thompson added.

The JHSV being christened on Saturday in Mobile can berth 146 passengers and carry an additional 312 in airline-style seating. A flight deck allows helicopters and rotary air vehicles to take off and land. It has a range of more than 1,380 miles.

READ THE REST OF THE STORY HERE
Posted by Steve Douglass at 3:43 PM