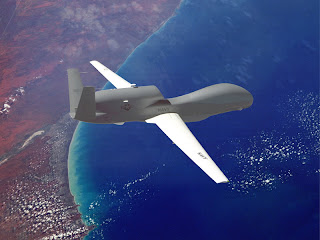 A Naval drone aircraft crashed on Maryland's Eastern Shore on Monday without injuries or property damage on the ground, officials said.

The 44-foot plane on a routine training flight crashed around noon near Bloodsworth Island, across the Chesapeake Bay from the Patuxent River Naval Air Station, according to Jaime Cosgrove, a spokeswoman for the Unmanned Aviation and Strike Weapons program.

Aerial video from WBOC-TV showed a plane-shaped indentation surrounded by burning debris at the swampy crash site.
The cause is being investigated and the U.S. Coast Guard has set up a safety zone around the crash site, officials said.

The Northrop Grumman RQ-4A BAMS-D drones with a range of 10,500 nautical miles can reach 11 miles above the ground, which is above most weather, and stay in the air for more than 30 hours with speeds up to 391 mph, according to the Navy. It is operated by a crew of four on the ground.

The aircraft is one of five acquired from the Air Force Global Hawk program that support more than half of maritime intelligence, surveillance and reconnaissance systems. They have flown more than 5,500 hours in support of combat operations since 2008.

The maritime surveillance aircraft have been used in support of the 5th Fleet, which covers much of the Middle East, including the Red Sea, the Persian Gulf and part of the east African coast.
The southern Maryland station at the mouth of the Patuxent River, 65 miles southeast of Washington, is home to the Navy's test pilot school, drone operations and principal research center for aircraft and support systems.
Read more: http://www.foxnews.com/us/2012/06/11/coast-guard-unmanned-navy-aircraft-crashes-in-us/?test=latestnews#ixzz1xcGwVghz
Posted by Steve Douglass at 2:22 PM