The U.S. government’s secret space program has decided to give NASA two telescopes as big as, and even more powerful than, the Hubble Space Telescope.
Designed for surveillance, the telescopes from the National Reconnaissance Office were no longer needed for spy missions and can now be used to study the heavens. 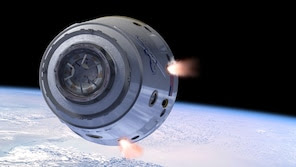 Private companies have liftoff: A look at the work of private space companies that will attempt to fill the hole left by the end of NASA’s shuttle program.


They have 2.4-meter (7.9 feet) mirrors, just like the Hubble. They also have an additional feature that the civilian space telescopes lack: A maneuverable secondary mirror that makes it possible to obtain more focused images. These telescopes will have 100 times the field of view of the Hubble, according to David Spergel, a Princeton astrophysicist and co-chair of the National Academies advisory panel on astronomy and astrophysics.
The surprise announcement Monday is a reminder that NASA isn’t the only space enterprise in the government — and isn’t even the best funded. NASA official Michael Moore gave some hint of what a Hubble-class space telescope might do if used for national security:
“With a Hubble here you could see a dime sitting on top of the Washington Monument.”
NASA officials stressed that they do not have a program to launch even one telescope at the moment, and that at the very earliest, under reasonable budgets, it would be 2020 before one of the two gifted telescopes could be in order. Asked whether anyone at NASA was popping champagne, the agency’s head of science, John Grunsfeld, answered, “We never pop champagne here; our budgets are too tight.”
But this is definitely a game-changer for NASA’s space science program. The unexpected gift offers NASA an opportunity to resurrect a plan to launch a new telescope to study the mysterious “dark energy” that is causing the universe’s expansion to accelerate.
The scientific community had made the dark energy telescope its top priority in the latest “decadal survey” of goals in astronomy and astrophysics.
But the hoped-for telescope has been blocked by a lack of funding, in large part because of cost overruns on the James Webb Space Telescope, which is still being readied for a possible launch later this decade. A new space telescope could also serve as a kind of scout for the Webb, Spergel said.
“It would be a great discovery telescope for where Webb should look in addition to doing the work on dark energy,” Spergel said.
The two new telescopes — which so far don’t even have names, other than Telescope One and Telescope Two — would be ready to go into space but for two hitches. First, they don’t have instruments. There are no cameras, spectrographs or other instruments that a space telescope typically needs. Second, they don’t have a program, a mission or a staff behind them. They’re just hardware.
“The hardware is a significant cost item and it’s a significant schedule item. The thing that takes the longest to build is the telescope,” Spergel said. He added, however, “A big cost of any mission is always just people. One of the reason that James Webb has cost so much is that when it takes longer to complete any piece of it, you keep paying the engineers working on it, and you have these big marching-army costs.”
NASA’s windfall takes the pain out of the planned demise of the Hubble, which has been repaired in orbit five times. NASA does not plan any more repair missions, and the Hubble will gradually lose the ability to maintain its position and focus. At some point NASA will de-orbit the Hubble and it will crash into the Pacific.
“Instead of losing a terrific telescope, you now have two telescopes even better to replace it with,” Spergel said.
Posted by Steve Douglass at 11:45 AM