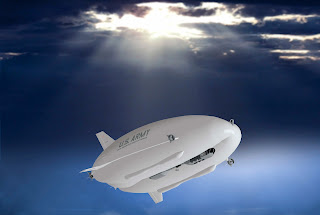 WIRED DANGER ROOM: TAMPA, Florida — Sure, it took an extra year or so, but Northrop Grumman has finally penciled in the first flight of the giant surveillance airship it’s building for the U.S. Army. The Long Endurance Multi-Intelligence Vehicle — a football-field-size, helium-filled robot blimp fitted with sensors and data-links — should take to the air over Lakehurst, New Jersey, the first or second week of June. K.C. Brown, Jr., Northrop’s director of Army programs, crows: ”We’re about to fly the thing!”
It’s fair to say Northrop and the Army are crossing their collective fingers for the flight to actually take place, and smoothly. Giant airships promise huge benefits — namely, low cost and long flight times — but it’s proved incredibly hard to build and equip the massive blimps with military-grade sensors and communications … and fill them with helium.
The Air Force’s highly computerized (and potenitally missile-armed) Blue Devil 2 airship recently ran into integration problems, forcing the flying branch to cancel a planned test run in Afghanistan. (Although the service had never been too hot on airships in the first place.) The Navy meanwhile grounded its much smaller MZ-3A research blimp for a lack of work until the Army paid to take it over. The LEMV seemed to be losing air, too, as Northrop and the Army repeatedly delayed its first flight and planned combat deployment originally slated for the end of 2011.
As recently as last month Northrop and the Army declined to comment on the airship’s new flight schedule. Northrop VP Brad Metzger’s boast from last summer that the $500-million LEMV prototype would “redefine persistent surveillance” seemed hollow.
Posted by Steve Douglass at 8:54 AM