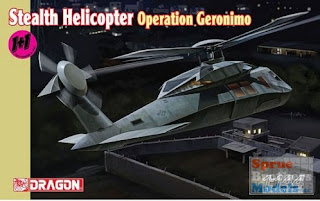 Gizmodo
Former Pentagon senior policy analyst F. Michael Maloof claims that Israel is using the same ultra-secret stealth H-60 Blackhawk helicopter that US Special Forces used to hunt down bin Laden. How is this possible?
These helicopters are highly modified versions of the Blackhawk. The regular version is manufactured by Sikorsky for the American military as well as the Republic of Korea's Army, the
Colombian Armed Forces and the Turkish Armed Forces. This highly modified version, however, is not available to anyone but American special forces. It was supposed to be an exclusive transport for the Navy SEALS.
Or at least, that's what we thought until this report by Maloof for Joseph Farah's G2 bulletin, a global intelligence newsletter. He claims that Israel has these the stealth Blackhawks too. According to him, they are using them to transport Iranian dissidents from the Sunni Kurdish portion of northern Iraq into Iran. The teams are groups of 12 armed man trained to gather intelligence on the Iranian nuclear program. Apparently, they are dressed as members of the Iranian military using Iranian military vehicles:

With the help of recruited Iranian dissidents in Kurdistan, the Israelis are attempting to gather sufficient information to convince the United States and the United Nations that Iran is involved in using its nuclear development program to make nuclear weapons.
Iraq's Kurdistan Regional Government officially has denied claims by Iranian officials regarding the missions. But various reports including a recent Times of London report suggest that Israel is using specially modified U.S.-supplied Black Hawk helicopters to carry 12-member armed teams with sensitive equipment to monitor radioactivity and the magnitude of explosives tests.

One of these stealth Blackhawks was shot down during the operation that ended in the death of Al-Qaeda's leader Osama bin Laden and its following burial at sea.
Ares' writer Bill Sweetman at Aviation Week described this helicopters as highly modified versions of the H-60 Blackhawk. Its tail "features stealth-configured shapes on the boom and tip fairings, swept stabilizers and a "dishpan" cover over a non-standard five-or-six-blade tail rotor. It has a silver-loaded infra-red suppression finish similar to that seen on some V-22s." Sweetman also pointed out that this secret version nobody knew about included aerodynamic and flight control adjustments that allowed less rotor speed and less noise, as well as a reduced radar cross-section.
It's not known if these secret stealth aircraft are on loan from Pentagon or units sold to Israel.
Posted by Steve Douglass at 3:12 PM

Note: Article says stealth helicopter was shot down - it was not.