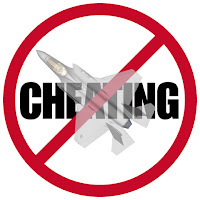 WIRED: It seemed like a promising step for America’s next stealth fighter: The F-35 Joint Strike Fighter passed a key Pentagon test of its combat capability. But it turns out that the family of jets cleared the mid-February exam only because its proctor agreed to inflate its grade. In essence, the military helped the F-35 cheat on its midterms.

The collusion between the Pentagon testing body, known as the Joint Requirements Oversight Council (JROC), and the F-35 program — first reported by Inside Defense — confirmed that the U.S.’ most expensive warplane met previously established performance criteria. Specifically, the review was meant to show that the jet can fly as far and take off as quickly as combat commanders say they need it to.

But the review council, which includes the vice chiefs of the Army, Navy, Air Force and Marine Corps, eased the standard flying profile of the Air Force’s F-35A model — thereby giving it a range boost of 30 miles. And it tacked an additional 50 feet onto the required takeoff distance for the Marines’ F-35B version, which Defense Secretary Leon Panetta just took off budgetary probation.

The grade inflation comes at a critical time for the new warplane. The military’s new five-year budgeting blueprint, also released in February, cut more than 100 existing Air Force fighters while leaving intact plans to produce nearly 2,500 F-35s — essentially doubling down on the new plane despite a recent report listing 13 serious design flaws. The total cost to buy and fly the full fleet of F-35s over 50 years is estimated at around $1 trillion, once inflation is factored in, making it the costliest defense program in human history.


In fairness, it’s not unknown for capability standards, also known as “Key Performance Parameters,” to shift during a weapon’s development. But the shifts usually reflect the evolving needs of the military or some change in the operational environment, such as a likely enemy tweaking its own defense plans. In this case, the JROC gave the F-35 a pass that was apparently designed so the over-weight, over-budget, long-delayed stealth fighter could avoid yet another embarrassing scandal.