About to hit the fan ... US pulls diplomats out of Syria 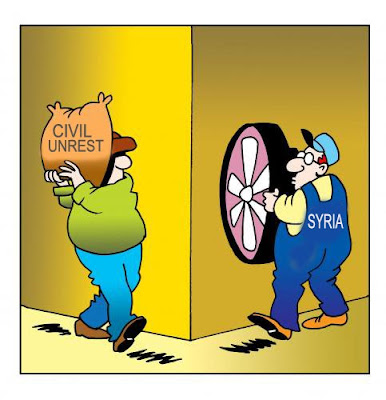 WASHINGTON -- The Obama administration closed the U.S. Embassy in Damascus on Monday and pulled all American diplomats out of violence-wracked Syria as the U.S. stepped up pressure on President Bashar Assad to leave power.

Robert Ford, the American ambassador, and 17 other U.S. officials left Syria and were expected to travel back to the United States. Ford informed Syrian authorities of the decision to leave earlier in the day, State Department officials said. Two diplomats left by air and the others went overland to Jordan.

Their departure comes two weeks after the State Department warned that it would close the embassy unless Assad's government better protected the mission, citing safety concerns about embassy personnel and a recent series of car bombs. And it coincides with a U.S. effort to build an international coalition in support of Syria's opposition.

State Department spokeswoman Victoria Nuland said in a statement that Ford remains the U.S. ambassador "to Syria and its people," and said he would continue his work on Syria, maintaining contacts with the Syrian opposition and supporting "the peaceful political transition which the Syrian people have so bravely sought."

The U.N. estimates that well over 5,400 people have been killed since March, when mostly peaceful protesters rose up to voice their anger toward four decades of dictatorship by the Assad family. A brutal crackdown ensued, prompting armed rebels to take the fight to regime troops and try to establish control in pro-opposition areas. The government has responded with even more violence, raising fears of an all-out civil war.

Despite the increased bloodshed, world powers are bitterly divided over how to deal with the situation. The U.S., its European partners and much of the Arab world want Assad to step down and transfer power to his vice president as part of a transition to democracy. But Russia and China, wary after watching the West help Libyan militia oust Muammar Qaddafi, reject any talk of military intervention or regime change. They vetoed a U.N. resolution over the weekend that would have endorsed an Arab League plan for Syria's post-Assad future.

President Barack Obama said the ongoing conflict in Syria should be resolved without outside military intervention, saying a negotiated solution in Syria is still possible. And he defended his administration's actions during the 11-month uprising against Assad's regime.

Obama deflected questions about whether the U.S and its partners should intervene militarily in Syria as they did in Libya, saying those decisions are made on a case-by-case basis.

"Not every situation is going to allow for the kind of military solution we saw with Libya," he said.

"I think it is very possible for us to try to resolve this without recourse to outside military intervention."

With diplomacy at an impasse, Secretary of State Hillary Rodham Clinton called Sunday for "friends of democratic Syria" to unite and rally against Assad's regime, previewing the possible formation of a group of like-minded nations to coordinate assistance to the Syrian opposition.

Speaking in Bulgaria, she said the world had a duty to halt the violence and see Assad out of power. She called the U.N. setback a "travesty."


READ MORE AT FOX NEWS
Posted by Steve Douglass at 8:03 AM