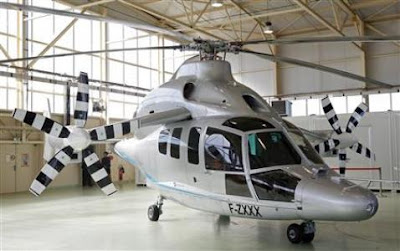 Eurocopter has revealed its hand in the race for high-speed rotary-wing flight, unveiling the extraordinary-looking X³ high-speed prototype on 27 September.

The aircraft was shown to reporters for the first time during a ceremony at Istres airbase in the south of France, where the X³ - short for High-speed, long-range Hybrid Helicopter - has been undergoing testing since the beginning of September.
Clearly recycled from the fuselage of an EC155, the demonstrator is a compound design equipped with two turboshaft engines powering a five-bladed main rotor and two propellers on stub wings. At the rear, the fenestron has been removed and replaced with a standard tail plane and twin-vertical stabilisers fitted with rudders.

Eurocopter says this configuration allows it to offer the speed of a turboprop-powered aircraft as well as the capabilities of a helicopter.
The X³ flew for the first time on 6 September from Istres AB – the flight test base of the French armed forces – 24km southwest of the Eurocopter factory at Marignane.

The aircraft was built at Marignane and then trucked to Istres for flight testing.
Eurocopter CEO, Lutz Bertling, said all the OEMs were looking to increase the range and speed of helicopters but argued that the technology demonstrated by the V-22 Osprey and BA609 tiltrotors and Sikorsky's X2 Technology demonstrator might be costly to implement and operate.
'We are looking at a lower level of complexity and cost,' explained Bertling. 'We believe it makes more sense to increase speed, but generate that speed by not over-compensating on cost.'
Phillippe Roesch, VP of technology and product innovation said the idea to deliver 50 % more speed but do this without pushing up operational costs beyond 20-25 %.

The entire programme is funded by Eurocopter and the aircraft is more than just a hybrid by design but also in terms of parts. The airframe was the development frame for the AS365N4 which became the EC155. The main rotor is also from the EC155 while the gearbox and engines came from the EC175 and NH90 respectively.

Eurocopter test pilots will now take the aircraft through initial flight testing opening the flight envelope to speeds of up to 180kts. The aircraft will then go into a three-month layup before resuming flight in March 2011 with the goal to achieving 220kts.

According to Eurocopter, the company envisions a wide range of uses for the X³ configuration, including long-distance search and rescue (SAR), coast guard duties, border patrol missions, passenger transport and inter-city shuttle services.
‘It also may be well-suited for military missions in special forces operations, troop transport, combat SAR and medical evacuation – benefiting from the hybrid aircraft’s combination of higher cruise speeds with excellent vertical takeoff/landing performance,’ the company said in a statement.


Rotorhub.com reported on the existence of the X³ programme when it was inadvertently revealed during a Rolls-Royce press briefing at Heli-Expo in Anaheim in 2009.

Posted by Steve Douglass at 5:35 PM