I watched with great interest the 60 Minutes interview with author and investigative reporter/editor Bob Woodward.

For those of you who may not know ( most likely anyone under 30) Bob Woodward, along with his (then) Washington Post colleague Carl Berstein almost single-handedly broke the Watergate scandal that ultimately forced President Richard M. Nixon to resign.

Bob was on Sixty Minutes talking about his latest book "The War Within" that details the decisions that led the U.S. from the brink of catastrophe in Iraq to the successes that followed the 2007 troop surge.

All very interesting, but one part of the interview really piqued my interest.:

>Woodward: "This is very sensitive and very top secret, but there are secret operational capabilities that have been developed by the military to locate, target, and kill leaders of al Qaeda in Iraq, insurgent leaders, renegade militia leaders. That is one of the true breakthroughs," Woodward told Pelley.

"But what are we talking about here? It's some kind of surveillance? Some kind of targeted way of taking out just the people that you're looking for? The leadership of the enemy?" Pelley asked.

"I'd love to go through the details, but I'm not going to," Woodward replied.

The details, Woodward says, would compromise the program.

"For a reporter, you don’t allow much," Pelley remarked.

"Well no, it’s with reluctance. From what I know about it, it's one of those things that go back to any war, World War I, World War II, the role of the tank, and the airplane. And it is the stuff of which military novels are written," Woodward said.

"Do you mean to say that this special capability is such an advance in military technique and technology that it reminds you of the advent of the tank and the airplane?" Pelley asked.

"Yeah," Woodward said. "If you were an al Qaeda leader or part of the insurgency in Iraq, or one of these renegade militias, and you knew about what they were able to do, you'd get your ass outta town."

So what is this big military breakthrough - this secret (that Bob could hardly contain) one that is on a par with the invention of tanks and warplanes?

Bob says he couldn't tell us because it would compromise the program, but there is no law against speculation and that's just what I'll do here.

Way back in the fall of 2003 ( in my first Popular Communications column) I wrote about an ominous and angular- looking long-winged black aircraft that u-2 pilots flying over Iraq encountered.

"Rumor" has it that it was a top-secret spin-off of Lockheed's cancelled UAV (DarkStar) called "DistantStar" a high-flying electronic-intelligence gathering reconnaissance drone that was tasked with eavesdropping on Saddam Hussein's (and his upper echelon leaders) wireless phone network and was also used over Afghanistan and Pakistan in the (ongoing) hunt for Osama Bin Laden. 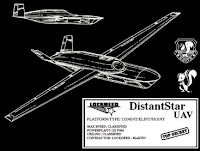 Inside sources said DistantStar was also invaluable during the hunt for Saddam and has also been a huge asset in intercepting the communications of Iraqi insurgents and al Queda cells in Iraq.

In one instance , the super-sensitive radio receivers on a DistantStar drone intercepted Saddam Hussein himself talking on his personal satellite telephone.

In less than ten minutes DistantStar (linked via satellite in near real-time to NSA computers employing advanced voice-analyzing algorithms) was able to confirm it was indeed Iraq's ruler in hiding and was able to pinpoint the GPS coordinates and relay them to a B-1B bomber already in position over Bagdad on another mission.

The B-1 dropped GPS guided bombs on the location only missing Saddam by several hundred yards.

Apparently he had heard the jets and moved to a bunker in another building.

So - the question remains- was Bob Woodward (not) talking about DistantStar?

Maybe he was (not) talking about just DistantStar - but - DistantStar coupled to a new weapon system that can surgically take out terrorists without having to call in an air strike or an aircraft carrying conventional weapons.

Remember the quote: "If you were al Qaeda leader or part of the insurgency in iraq, or one these renegade militia and you knew what they were able to do, you'd get your ass out of town."

A UAV (even a smart signal-seeking brilliant UAV) is hardly enough to strike fear into the hearts of insurgents - but a revolutionary weapon - one - they had no defense against - something amazingly scary - would.

And what would that something be?

I talked at length with William Scott about Woodward's (almost) revelation.

William Scott is a retired Rocky Mountain bureau chief for Aviation Week & Space Technology magazine and a former U.S. Air Force flight-test engineer, who served with the National Security Agency and as aircrew on nuclear-sampling missions.

Scott was also struck by what Woodward had said and theorized what he might (not) be talking about.

According to Scott, in his next book, Counterspace: The Next Hours of World War III ( a sequel to Space Wars - The First Six Hours of WW III) is a chapter - based on an actual secret weapon that could be the one Woodward is alluding to.

In this chapter, a group of terrorists are taken out by a electromagnetic surge that can disrupt the nerve impulses in a human body leading to what amounts to a heart attack.

Imagine a focused beam of undetectable energy, fired by a stealthy and silent UAV, causing everyone in a secret lair to suddenly die of what seems to be acute heart failure.

No big bombs going off. No collateral damage and no blast damage to buildings or valuable infrastructure.

Not to mention the psychological impact the sudden death of twenty men (by no apparent means) would have on anyone who happened to stumble on the scene.

"What killed these men? There are no wounds on the body. No signs of chemical agents. Was it the Americans or was it the Angel of Death himself?" a terrorist might wonder.

Right about now, some writer is thinking about incorporating the above scenario into his latest Hollywood script, but as gee-whiz as it seems, the theory behind such a weapon has been around for some time.

It is a fact that the Pentagon has been funding the development of "Directed Energy Weapons" since the late 1980s.

Imagine what such a weapon could do when coupled with the ultimate artificially-intelligent flying robotic radio-wave sniffing hound dog. Use a wireless phone or a two-way radio and - zap! - you (and yours) drop dead of a heart attack.

But what if the enemy puts two and two together and is able to relate using RF emitting devices (such as cell-phones or radios) to the sudden deaths of high-ranking terrorist leaders?

Then you have someone on the inside, tag a terrorist with an RF-emitting device.

So by now, you might be asking yourself, why reveal the existence of such a secret system to a reporter, especially Bob Woodward? You know he's going to write about it - or as in this case - allude to it. What purpose does it serve?

Shouldn't a secret weapon system, especially one that has helped turn the tide in iraq remain a secret?

William Scott and I pondered this conundrum and came to two conclusions:

As happened during the development of the atomic bomb, someone, possibly from within the program thinks the use of such a weapon is repugnant, even though (as also was the case with the atom bomb) it saves lives in the long run.

Someone in the Pentagon wants to keep the enemy guessing, wondering if we have such a weapon (even if it doesn't really exist) causing them to loose sleep and be kept off balance, always wondering if the American hand of death is waiting to swoop down on them and take them out.

Therefore, in either scenario, to serve your agenda - you leak the program to Bob Woodward, a widely respected award-winning-journalist.

At the end of the day, Woodward's non-revealing revelation (like the identity of Deep Throat) may serve many purposes, the least of them being boosting Bob Woodward's book sales.

I don't know about you, but I'm buying a copy- just to read about what Bob is not talking about.

Update: According to a recent statement in a CNN interview Bob Woodward said "must remain secret for now or it would "get people killed. "

Then why talk about it at all?

If Bob is to believed (or his source for that matter) the weapon must be delivered up close and personal, maybe by a team of specially trained Special Ops commandos, directed to the location by DistantStar.

So it stands to reason disclosure of the program could compromise those tasked with deploying the weapon or RF tagging the enemy targets.

Remember, all this falls under the realm of speculation, but it could work this way:

Once pinpointed, Special Ops commandos are called in to use the weapon. Zap!- sudden chest pain and an enclave of terrorists drops dead.

I have no problem with that.

BW's comments seem to suggest that this was something more "up-close-and-personal". I am referring to his note that revealing such an innovation will "get people killed".

Now, what could that be?

Probably a secret operation to create a bestseller and increase his bank account.

Steve... very interesting stuff. I am fascinated with this story even though I am not a military junkie.

I have been doing a little digging and have a question for you...

You refer to this as a Pentagon operation but how about the possibility that this is being executed by the "Strategic Support Branch," the secret DoD/DIA unit that was uncovered by Woodward's newspaper in 2005?

Googling the SSB led me to a reference to "J2X CONOPS" which is discussed in an interesting article on the globalsecurity.org web site

It's a little dated now but I'm wondering if this stuff is all related?

The US Government is currently experimenting on US citizens with DEW (directed energy weapons). See Facebook page CHARLES IAN and YouTube page DCM61267.