The Naval Criminal Investigative Service (NCIS) has made an arrest in connection with a shipyard fire that devastated the Los Angeles-class fast-attack submarine, USS Miami, in Portsmouth Naval Shipyard on May 23rd.  No lives were lost in the blaze, however with damages of around $400 million, this is likely the most expensive ship fire since the USS Forrestal caught fire in the Gulf of Tonkin in 1967. 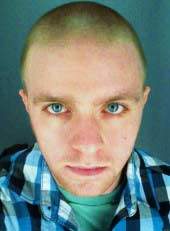 Casey James Fury, image via Myspace
Casey James Fury, a 24-year-old civilian worker at the Shipyard, is charged with arson and was taken into custody by NCIS on July 20th.  His first appearance hearing before a federal magistrate in Portland, Maine was held today.
Information gathered by NCIS indicates that Fury is responsible for the fire on board USS Miami as well as a second minor fire in the Shipyard’s Dry Dock #2 area on June 16th.  Specific details have not been released however.
The criminal complaint accuses Fury of two counts of Title 18, United States Code, Section 81 (Arson) “within the special maritime and territorial jurisdiction of the United States, willfully and maliciously set fire to and burned a vessel, namely the USS Miami, together with building materials and supplies located thereon.”
The second count will be specific to burned building materials and supplies located in and around USS Miami.
A criminal investigation headed by NCIS began soon after the fire was reported May 23 and is ongoing. Other law enforcement agencies including ATF (Bureau of Alcohol, Tobacco, Firearms and Explosives) are assisting in this investigation.
The Navy has begun planning repairs with the goal of returning USS Miami to the fleet.

Earlier the US NAVY blamed the fire on a defective vacuum cleaner.
Posted by Steve Douglass at 8:05 AM No comments: Links to this post