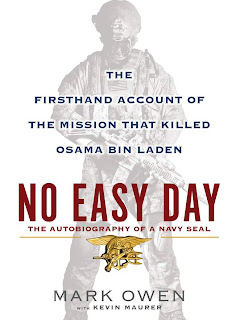 WIRED DANGER ROOM: Before SEAL Team 6 was sent into Pakistan to kill Osama bin Laden, the troops were given a cover story, in case the mission went south. They were supposed to say that they were deep in Pakistani territory, hunting for a lost drone.
It’s one of many fascinating details in No Easy Day, Navy SEAL Matt Bissonette’s firsthand account of the bin Laden raid.
“We all laughed,” Bissonette writes about the explanation. “The story was preposterous. We were allies with Pakistan on paper, so if we did lose a drone, the State Department would negotiate directly with the Pakistani government to get it back. The story didn’t wash and would be very difficult to stick to during hours of questioning…. The truth is, if we got to that point, no story we could come up with was going to cover up twenty-two SEALs packing sixty pounds of hi-tech gear on their backs.”
The night before the raid, some of the SEALs took Ambien, because they couldn’t sleep. They batted away CIA suggestions to take an extra sixty-pound box of cellphone-jamming equipment. Bissonette took along $200 in cash, “if I needed to buy a ride or bribe someone,” and a digital camera, which he later used to shoot photographs of bin Laden’s dead body and bloody face.
On the mission, Bissonette wore $65,000 four-tube night-vision goggles like these, to help him see more clearly and more widely in the night. He dozed on the ride to Abbottabad, then dangled his legs outside the stealth helicopter. When that chopper crashed, his fellow SEAL yanked in Bissonette just before the impact nearly crippled him. It all happened so quickly, neither the SEALs in the accompanying copter nor the administration officials watching the scene from the White House situation room realized the landing was anything but routine.
To confirm that the tall man on the third floor of the Abbottabad compound was really bin Laden, the SEALs took samples of bin Laden’s blood, saliva and bone marrow. Then they dragged the body onto a CH-47 Chinook helicopter. The aircraft had loitered above the compound for so long while the SEALs were gathering up bin Laden’s hard drives, it almost ran out of gas.
Despite the miscues, the raid was a success, of course. In part, that’s because it was so well rehearsed. Some of the most interesting moments of No Easy Day, written by Bissonette under a pseudonym and co-authored by the journalist Kevin Maurer, show just how well the American intelligence community had bin Laden’s compound under watch.  CIA analysts watched months of drone video of the man they believed to be bin Laden. They even briefed the SEALs on what kind of digital voice recorder bin Laden liked to use.
In the full-scale model of the compound in the North Carolina woods, “construction crews put in mounded dirt to simulate the potato fields that surrounded the compound.” An analyst from the National Geospatial-Intelligence Agency knew every detail of bin Laden’s hideout.
“Hey, are these doors on C1 inward or outward opening,” Bissonette asked her.
“Double metal doors,” she answered. “Opens outward.”
Before they left for Pakistan, the SEALs performed a mock raid on the compound, with the top brass of the special operations and intelligence communities watching through night vision goggles. After that, the SEALs’ mission was greenlit.
“Try not to shoot the motherfucker in the face,” one SEAL said, referring to bin Laden. “Everybody is going to want to see this picture.”
Ultimately, the White House decided not to disclose those photographs taken by Bissonette. They got his story of the raid instead.
Read more at WIRED
Posted by Steve Douglass at 9:07 AM No comments: Links to this post

Vote for my photo please in the Boeing Store contest!

Posted by Steve Douglass at 7:03 AM No comments: Links to this post