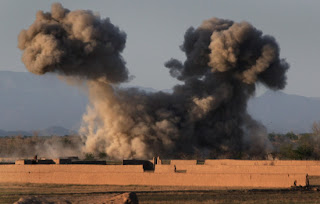 "A US drone struck a house where al Qaeda militants were meeting, and a car nearby," in the town of Azzan in Shabwa province, a tribal source said on condition of anonymity.
He said "nine people were killed in the explosions." A local medic confirmed the toll.
Several hundred al Qaeda militants are believed to have fled to Azzan in the hours before two al Qaeda strongholds in Yemen's southern Abyan province, Jaar and Zinjibar, were recaptured by the army Tuesday.

Al Qaeda gunmen were also believed to have fled to the town of Shuqra, east of the newly recaptured towns, where according to one local official, fierce clashes raged Wednesday between troops and jihadists.

"Al Qaeda is still resisting and there are battles in and around the city," where many of al Qaeda's leadership is known to be hiding, the official said on condition of anonymity.
He said the army has "surrounded the town from three sides."

In Azzan, a resident said dozens of people "have fled" since the early morning drone strike.
"The explosions were very strong ... they shook the whole town," said the resident who spoke on condition of anonymity.

The capture of Zinjibar and Jaar marked the first major victories of a month-long army offensive to destroy al Qaeda in the Arabian Peninsula, the name given to the network's Yemen branch.
The militants, taking advantage of a central government weakened by last year's Arab-Spring style uprisings, had overrun most of Abyan, taking full control of the capital, Zinjibar, as well as Jaar, Shuqra and several villages


Read more: http://www.nypost.com/p/news/international/us_drone_strike_against_al_qaeda_IkJNKhh8Zlv39flKPy5aMO#ixzz1xgVTlWmG
Posted by Steve Douglass at 7:45 AM No comments: Links to this post