Karzai says he has evidence Pakistan was behind bombing 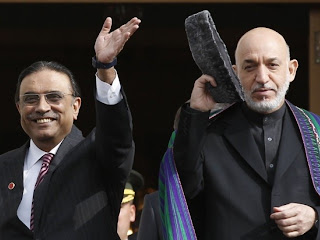 ANKARA: Afghan President Hamid Karzai will submit evidence to Pakistan during a meeting in Turkey on Tuesday suggesting that the attack on Afghanistan’s spy chief was hatched in Pakistan, said Karzai’s spokesperson.

“President Karzai will submit all the documents and evidence in hand to Pakistan President Asif Ali Zardari, which suggest the attack was hatched in Quetta in Pakistan, and follow this up seriously,” said Siamak Herawi, a spokesperson for Karzai.
Karzai was to hold talks with Zardari at a trilateral summit hosted by Turkish President Abdullah Gul in Ankara on Tuesday and Wednesday. Foreign ministers and senior officials from both countries will also meet at the summit, the seventh of its kind in Turkey.
The bomber, who hid explosives inside his underwear and posed as a peace messenger, wounded spy chief Asadullah Khalid last Thursday in a brazen attack that set back a nascent, already fragile reconciliation process.
Speaking after the attack, Karzai stopped short of directly blaming his neighbour but said he knew “for a fact” the bomber came from Pakistan and that Kabul would seek clarification from Islamabad during meetings in Turkey.
While the Taliban have claimed responsibility for the bombing, Karzai has said the raid was too sophisticated to have been carried out by the militant group.
“Bigger hands are involved,” said Herawi, repeating a phrase often used by the Afghan leader after high-profile attacks.
Pakistan has said it would assist in any investigation into the bombing, but also urged Karzai to provide evidence before “levelling charges”, and suggested Kabul look into any lapses in its own security arrangements that may have led to the raid.
Strained ties
While the latest spat is unlikely to cause any lasting damage – Karzai has issued more direct charges at Pakistan in the past and has said contacts between both countries would continue – ties between Kabul and Islamabad remain strained.
Afghanistan has been angered by cross-border raids by militant groups from Pakistan, and has repeatedly accused its neighbour’s intelligence agency of backing Afghan insurgent groups to advance its own interests in the country.
Pakistan denies the accusations and says it is committed to helping bring peace to Afghanistan.
The attack on Afghanistan’s top spy was almost a carbon copy of last year’s assassination of the country’s chief peace negotiator, Burhanuddin Rabbani, a killing in which Afghanistan said Pakistan was involved.
Pakistan has, however, sent recent strong signals it would support the Afghan government’s efforts to draw the Taliban into negotiations after more than a decade of war.
The United States and Western nations with troops in Afghanistan have long abandoned the notion of defeating the Taliban militarily and have reluctantly thrown their weight behind negotiating with the militants to end the fighting.
That the insurgents are capable of striking in the heart of the Kabul after more than 10 years of fighting highlights Afghanistan’s ongoing instability as US-led Nato troops prepare to withdraw by the end of 2014.
Posted by Steve Douglass at 7:33 AM