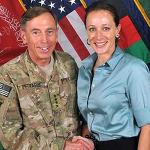 USA TODAY:  In October, Paula Broadwell, the woman at the center of the David Petraeus adultery case, spoke publicly about events surrounding the Benghazi attack that appeared to go beyond what was in the public record at the time.
Broadwell, co-author of a biography about Petraeus, was speaking at the University of Denver Oct. 26 and responded to questions about the attack on the U.S. Consulate that led to the death of four Americans, including the U.S. ambassador to Libya.
"Now I don't know if a lot of you heard this, but the CIA annex had actually -- had taken a couple of Libyan militia members prisoner and they think that the attack on the consulate was an effort to try to get these prisoners back. So that's still being vetted," she said.
Eli Lake, writing for The Daily Beast, reported that it is possible that Broadwell was confusing details of a story on Fox News that day that claimed that three of the Libyan attackers were briefly held at a CIA annex in Benghazi, not the consulate, before being turned over to the local militia.
Lake also reported that the CIA on Sunday denied the claim that prisoners were held at the annex, which has not been reported elsewhere.
In her remarks, Broadwell also talked about Petraeus' involvement in the Benghazi situation as CIA director.
"The challenging thing for General Petraeus is that in his new position he is not allowed to communicate with the press," she told the audience. "So he's known all of this, they had correspondence with the CIA station chief in Libya. Within 24 hours they kind of knew what was happening."
The remarks are contained in a 40-minute speech by Broadwell, a West Point graduate and military officer, in which she discussed her military background, how she met Petraeus and elements of his personal life, such as his transition from military officer to director of the CIA.
Petraeus resigned on Friday, citing his "poor judgment" over the extramarital affair.
Posted by Steve Douglass at 9:04 AM