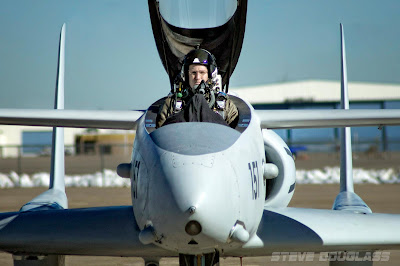 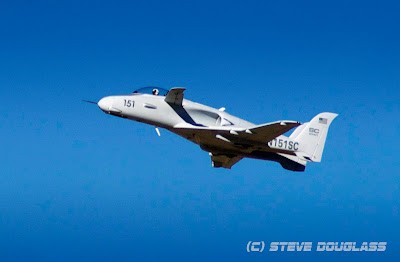 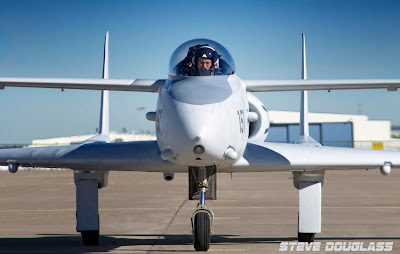 A rare - one -of-a-kind military prototype made a surprise stop at Rick Husband Amarillo International today. It's called the Model 151 Ares and was designed as a proof-of concept demonstrator for the US Army's requirements for a low-cost - fast and agile attack aircraft - a sort of mini A-10 Warthog - the current US militarys' premier tank killer.

Designed in the early 90s, by Scaled Composites out of Mojave, California - who built the first private space ship (Virgin Galactic's Space Ship One) and Space Ship Two (the first commercial space ship soon to be taking well-heeled passengers into space - ARES 151 landed shortly before noon to refuel.

The aircraft (thought to be in mothballs) has been taken out of retirement and is being used as a test-bed for the NAVY, its' mission - classified.

It is interesting to note the ARES 151 sports a new low-vis flat grey paint job and a few more (new?) antennae - slightly modified (more rounded) lines and was absent it's 25 mm GAU-12/U Gatling cannon as seen in the video below.

The aircraft flew on to Smyrna Georgia and is rumored to be heading to the Naval Air Warfare Center at Pax River in Maryland.

A little more info from WikiPedia

The ARES has quite unique shape compared to other aircraft. It incorporates canards which enable safer flight at low altitude. The canards serve as the pitch control and are designed so that the canard surface reaches critical angle of attack sooner than the main wings, protecting the aircraft from stall while full roll control is retained.

The canards have a wingspan of 19.2 feet (5.85 m) and are swept 7 degrees forward so they can be placed behind the cockpit.

These strakes, combined with a wet wing center-section area, form the bulk of the 2,200 lb (1000 kg, approximately 333 U.S. gallons) fuel capacity. The wing has conventional ailerons on the outboard trailing edge, and spoil-flaps (similar to the dive-brake flap) on the inboard trailing edges. The ailerons are actuated by push-rods, and the spoil-flaps are hydraulically operated.

Directional stability is provided by twin boom-mounted fins, each of 18 sq ft (1.7 m2). area. Each has a cable-actuated rudder at its trailing edge. The rudder actuation system also drives the full-time mechanical nosewheel steering for ground operations.

The engine inlet is another major unique feature of ARES. Since gun gas ingestion posed significant problems in other aircraft development programs (like A-10), the configuration of ARES was designed to avoid this problem: the engine inlet is entirely contained on the left side of the aircraft, and the gun is installed on the right side. The inlet has a circular cross section, and is straight into the fan face. The engine is mounted slightly transversely in the fuselage, with an 8-degree misalignment from the aircraft's longitudinal axis.

The engine exhaust is turned back to the longitudinal axis by a curved composite tailpipe. A composite tailpipe was to help get the gun recoil reaction closer to the aircraft lateral center of gravity (CG) location, the gun is sub-merged as deeply as practical into the right side of the fuselage. Also, the fuselage is not centered about the aircraft centerline, but is offset to the left by three inches. This results in the firing barrel of the gun being only about 18 inches from the lateral CG. This minimizes the yaw movement caused by the recoil of the gun. 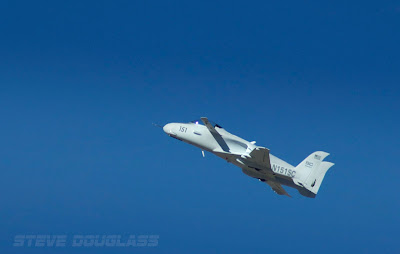 Posted by Steve Douglass at 7:17 PM

Those are very nice modern airplanes. I stumpled upon this blog by accident not getting what I was looking for. But I can tell i read the whole page with a lot of interest. Since I do have more than an average interest in planes. Keep on doing the good work in 2012!

Thanks for the story! I really was looking for something similar to this beautiful aircraft. Please forgive me for my English.
Sincerely, the modeller from Russia.