Iran denies nuclear facility blew up - but satellites reveal it did. 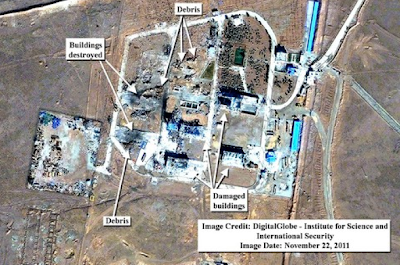 Officials from the Iranian city of Isfahan denied on Tuesday that the city had been hit by a mysterious explosion the previous day.

Mohammad-Mahdi Esma'ili, Isfahan's deputy governor in political and security affairs, called the reports "sheer lies" according to the IRNA news agency. An official from the city's fire department also denied that there had been an explosion.

A mysterious explosion rocked the Iranian city of Isfahan on Monday, home to a key facility in Tehran’s nuclear program.

The source and target of the explosion were unclear. Some reports claimed that it took place in a military base and others claimed it was a gas explosion. Isfahan hosts a nuclear facility involved in processing uranium which is fed to the Natanz fuel enrichment facility.

Two weeks ago, on November 12, an explosion hit an Iranian military base near the town of Bid Kaneh, killing 17 members of the Iranian Revolutionary Guard Corps and Maj.-Gen. Hassan Moghaddam, chief architect of the Islamic Republic’s ballistic missile program. Israel’s Mossad has been accused of orchestrating the blast.


On Monday, the Washington, DC-based Institute for Science and International Security (ISIS) revealed a satellite image of the military base harmed in the attack two week ago. The image showed extensive damage to a number of buildings within the compound. ISIS said that the blast was caused while Iran was apparently performing a procedure involving an engine for a new missile.

Head of the Military Intelligence Research Directorate Brig.-Gen. Itay Brun told the Knesset’s Foreign Affairs and Defense Committee on Monday that the blast at the missile base on November 12 could delay Tehran’s development of long-range missiles.

“The explosion at the site to develop surface-to-surface missiles could stop or delay activities on that track and in that location, but we must emphasize that Iran has other development tracks in addition to that facility,” Brun said.

Compared to an earlier satellite image of the site, the image taken after the blast on November 22 shows damage to most of the buildings in the base.

Some were completely destroyed. ISIS said that some of the destruction could have been the result of subsequent controlled demolition of buildings and the removal of debris.

The Iranian media provided contradictory information about the explosion on Monday.

The Fars news agency reported a large blast in the province but later removed the report from its website.

The Mehr news agency cited other Iranian news media, which it did not identify, as reporting that a blast had taken place at a gas station at a town near Isfahan. However, it also quoted the deputy governor of the province as saying he had no reports of a big explosion in his region.

“So far, no report of a major explosion has been heard from any government body in Isfahan,” Deputy Governor Mohammad Mehdi was quoted as saying by the semi-official news agency.

Van Rompuy did not offer details of the planned sanctions in remarks to reporters after a White House meeting with President Barack Obama and other top US officials.

In a joint statement issued after the meeting, the US and EU said they shared “deep concern” about the possible military dimensions of Tehran’s nuclear pursuits.

“We stress our determination to ensure that Iran complies with its obligations, including abiding by United Nations Security Council resolutions, and to cooperate fully with the IAEA to address the international community’s serious concerns over the nature of its nuclear program,” the statement read.

Reuters contributed to the report.
Posted by Steve Douglass at 6:34 PM