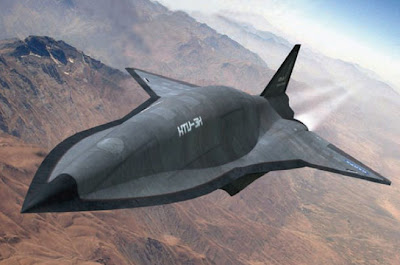 Editor's note: Awhile back when it was reported that BlackSwift was cancelled - I speculated that it really wasn't and that it just retreated into the black world. I hate to say I told you so but ...


The U.S. Air Force is studying a hypersonic road map which calls for development of ambitious high-speed weapons and a high-speed reusable flight research vehicle (HSRFRV), slightly larger than the Darpa-led Blackswift Mach 6 demonstrator cancelled in 2008.

Both high-speed elements emerged from a government-industry workshop meeting in Washington DC held on Dec. 8-9, and covered development priorities designed to maintain the recent impetus in hypersonics gained with the X-51A WaveRider and to some extent the X-37B Orbital Test Vehicle and HTV-2 hypersonic test.

The plan, discussed by Steven Walker, deputy assistant secretary of the Air Force for science, technology and engineering, at the recent AIAA Aerospace Sciences conference in Orlando, Fla., includes parallel development paths towards both hypersonic weapons and the reusable testbed.

The weapons path would be relatively fast-track, with development of a demonstrator over five years and first flight by October 2016. Three major options for the demonstrator include an “X-51-like” vehicle that would, like the WaveRider, be air-launched from a B-52. A second option would cover development of a “tactically-compliant” high-speed version that could be carried by internally-carried by the Northrop Grumman B-2, and externally by the Lockheed Martin F-35. A third option, also involving a B-2/F-35 capable launch, would be an all-new vehicle configuration.

The more advanced element of the road map is Walker’s call for a re-usable demonstrator incorporating a turbine-based combined cycle (TBCC), as well as the ability to take-off and land on a runway. As with the Blackswift project, the HSRFRV’s TBCC will combine a high-Mach turbojet with a dual-mode ramjet/scramjet, the two sharing a common inlet and nozzle. Unlike Blackswift’s TBCC, however, which was designed to power the demonstrator from takeoff to a very short period of five-minutes at Mach 6 cruise and back, the HSRFRV appears to be aimed at more ambitious goals.

Walker says the proposed vehicle will have the capability for up to 15 minutes at Mach 4 plus. In addition it will have limited duration at higher Mach numbers. Mindful of the pitfalls that have swallowed up so many previous hypersonic goals, not the least of them the X-30 National Aerospace Plane (NASP), the plan calls for a steady development schedule towards a first flight in October 2021. Walker says “the team feels if the money is available we can get there”.

Speaking to Aviation Week, Air Force Research Laboratory X-51A program manager Charles Brink says “the Air Force, under Steve’s leadership, has been doing a good job of herding all the cats, and coming up with a more streamlined, coherent high-speed vehicle roadmap.” The completion of the X-51A, he says, will provide data that “plays into the rules and tools development” for use in the following weapons and platforms developments. Brink adds that the Air force is aiming to conduct the second attempted flight of the X-51A in late March, having abandoned a potential window this month owing to unavailability of a B-52 launch aircraft.

READ THE FULL STORY HERE AT AVWK
Posted by Steve Douglass at 2:18 PM