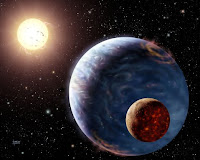 Astronomers have discovered a planetary system containing at least five planets that orbit a star called HD 10180, which is much like our own Sun.

The star is 127 light years away, in the southern constellation of Hydrus.

The researchers used the European Southern Observatory (Eso) to monitor light emitted from the system and identify and characterise the planets.

They say this is the "richest" system of exoplanets - planets outside our own Solar System - ever found.

Christophe Lovis from Geneva University's observatory in Switzerland was lead researcher on the study. He said that his team had probably found "the system with the most planets yet discovered".


The discovery could provide insight into the formation of our own Solar System
"This also highlights the fact that we are now entering a new era in exoplanet research - the study of complex planetary systems and not just of individual planets," he said.

The research has been submitted for publication to the journal Astronomy and Astrophysics.

Harps measures the wobble of a star; this gives a measure of how much it is being tugged on by an orbiting planet.

"If there is one planet it will induce a little movement - the star will come towards us and move away," Dr Lovis explained to BBC News.

"And what works for one [planet] works for many."

With many planets orbiting the star, its movement becomes a very complex "superposition" of several different planet-induced movements.

Martin Dominik
University of St Andrews
Using Harp, Dr Lovis and his team were able to measure this and break it down, in order to calculate how many planets were in the system, how great each of their masses was, and even the path of each individual planet's orbit.

The researchers said the system around HD 10180 as unique in several respects.

It has at least five "Neptune-like planets" lying within a distance equivalent to the orbit of Mars, making it more populated than our own Solar System in its inner region. And all the planets seem to have almost circular orbits.

Dr Lovis said: "Studies of planetary motions in the new system reveal complex gravitational interactions between the planets and give us insights into the long-term evolution of the system."

False alarm?
So far, the astronomers have picked up clear signals from five planets, along with two slightly "fuzzier" signals. One of these possible sixth and seventh planets was estimated to be just 1.4 times the mass of the Earth; if its presence in the system was confirmed, it would be the lowest mass exoplanet yet discovered.

It is also predicted to be very close to its host star - just 2% of the Earth-Sun distance, so one year on this planet would last only 1.2 Earth days.

Dr Lovis said he was 99% certain that this small planet was there.

"There are five signals that are really strong that we have no doubt, but we have another two with a 'false alarm' probability of 1%," he said.

Martin Dominik, an astronomer and exoplanet hunter from the UK's University of St Andrews said the complexity and structure of this system made it an interesting discovery.

"The richness of the system of planets around HD 10180 with its many characteristic features marks the way forward towards gathering the information that will put our own existence into cosmic context," he told BBC News.

He cautioned against describing this as the "richest system" saying that it was not clear whether other systems that had already been detected hosted further planets.

Dr Dominik added: "I am tempted to consider the detected system as one of the most 'informative' ones.

"Like most discoveries in science, the findings come with more questions than answers; but in my opinion, this is what really advances a field.
Posted by Steve Douglass at 8:33 AM No comments: Links to this post

TARBELA, PAKISTAN -- Everyone here remembers the Americans.
The Washington Post

They came with their blueprints, their engineering know-how and their money. By the time they left in the early 1970s, they had helped build a world-class dam that kept parts of Pakistan dry this month while vast stretches of the country drowned.

"This dam gives great benefit to the nation, and if not for the Americans it would never have been constructed," said Syed Naimat Shah, a local contractor.

But Shah hasn't seen any new assistance from the Americans in decades, and apparently many Pakistanis haven't, either. The U.S. government has provided about $18 billion in civilian and military aid to Pakistan since the Sept. 11, 2001, attacks made this country America's most essential, and vexing, ally. Yet according to a Pew Research Center survey released last month, half of Pakistanis believe the United States gives little to no assistance here.

For Obama administration officials, that's a source of deep anxiety -- and frustration. Pakistan is at the center of U.S. hopes to turn around the flagging Afghan war, but persistent anti-American feelings limit the extent of Pakistani cooperation. On her visit to Pakistan last month, Secretary of State Hillary Rodham Clinton mused that Americans must wonder "why we're sending money to a country that doesn't want it."

Pakistanis insist they are not ungrateful. They just don't see any tangible impact from the massive sums the United States spends. Unlike assistance from decades ago, the money from the post-Sept. 11 era, Pakistanis say, tends to vanish without a trace.

"Everyone here hates the American government," said Shah, a spirited 71-year-old with a stark white beard and a sharp tongue. "I haven't seen a penny of this U.S. assistance."

Analysts say there are many reasons: poor coordination with the Pakistani government, a lack of understanding of Pakistan's needs and a reluctance to produce iconic projects, lest they become targets for terrorists.

"American assistance is always of a nature that is not seen or felt," said Tariq Fatemi, a former Pakistani ambassador to the United States. "How many dams were built? How many highways? Can you touch anything that was built with U.S. assistance?"

U.S. officials say aid money is making a positive impact, if not always a widely noticed one. Since Sept. 11, Pakistan has ranked among the top five recipients of U.S. civilian and military aid, in a group with Israel, Egypt, Afghanistan and Iraq. But they acknowledge the overall criticism and say they are fundamentally changing the way they spend taxpayer dollars here.

The $7.5 billion Kerry-Lugar civilian aid package, passed by Congress late last year, is providing the first big test. Unlike in the past, the money will be routed directly through Pakistani agencies and institutions, and officials say the results will be far more visible.

But already, there have been delays that could keep the money from making an impact anytime soon.

"We're having trouble moving this money," said Robert J. Wilson, the USAID mission director here. "It's not easy to change the approach."

The Kerry-Lugar funds, which will be spread over five years, were intended to help erase the widespread perception that the United States cares only about supporting Pakistan's military.

Indeed, most U.S. assistance over the past nine years has paid for night-vision goggles, F-16 fighter jets, unmanned surveillance planes and other tools that help the army battle the Taliban, but has done little to convince Pakistanis that the United States cares about their well-being.

Still, the United States will have spent nearly $5 billion in civilian assistance by the end of the year, and that money is supposed to buy goodwill.

By almost all accounts, it hasn't. Although the United States has received praise here for its speedy response to the summer's catastrophic floods, Pakistanis remain suspicious of American motives. In the Pew poll, nearly six in 10 Pakistanis described the United States as an enemy; only one in 10 called it a partner.

When Qazi was appointed education minister in 2004 after retiring from the military, he expected that U.S. assistance would help him raise standards. There was much to do: Pakistan's public schools are in deplorable condition, with more than half lacking electricity and teachers earning as little as $50 a month.

But Qazi said he soon discovered that the United States did not even coordinate its programs with the education ministry. Most of the money seemed to go to U.S. consultants "who would carry out a study for something or other that we did not need."

Another, he said, involved spending millions to send Pakistani teachers to Washington for months of training. Qazi wondered why the United States had not just paid for training in Pakistan, which could have had many times the impact.

Invited to Washington himself, Qazi said he finally lost his patience at a meeting in a State Department office once used by Gen. George C. Marshall, architect of Europe's reconstruction.

"I said, 'You do the opposite of what Marshall did. You don't ask us what we want to do. You tell us what you want to do,' " he said.

The complaint is a familiar one here. A program to train female health workers, for instance, was duplicating the work of a similar Pakistani government program. A recently announced plan to put solar panels on the roofs of the elite and private Beaconhouse school system, meanwhile, has been widely derided as out of touch when many public schools lack even roofs.

Pakistani analysts say a system that relies largely on Beltway contractors to devise the plans and get the work done has yielded few results. Wilson, the USAID director, said his agency is transitioning away from that system and toward the Pakistanis themselves.

But doing so poses its own set of challenges. Pakistan's government is rated among the most corrupt in the world, and the United States has a lengthy process for certifying the accountability of its partners. As a result, very little of the Kerry-Lugar money has hit the ground nearly a year after the bill's passage.

When it does, Pakistani development officials worry that it will be spent without regard for the results, or for the limitations in Pakistan's capacity to absorb the funds.

"When the money comes in, there's a lot of pressure to spend it," said Mehnaz Aziz, chief executive of the Children's Global Network, a nongovernmental organization that has had small contracts with USAID. "I would never want to be in a position to spend $100 million in Pakistan."

All that money does not necessarily mean high-profile projects. Because anything in Pakistan that's associated with America is vulnerable to attack, the United States has shied away from projects that could make for alluring targets.

Qazi, the former education minister and spymaster, said the threat is overstated. He said that if the United States set up a technical training institute, no one would dare attack it. "Call it the American School of Technology. People are running to the U.S. for good technical education. So set it up over here," he said.

U.S. officials are not convinced. But they say the incoming money will have a tangible impact. Among the projects slated to begin is one in Tarbela, where American engineers worked decades ago with a consortium of international and Pakistani partners to build the dam.

For $16 million, USAID plans to upgrade the dam's turbines, which produce hydropower. The work is expected to significantly cut Pakistan's chronic energy deficit.

Word has begun to spread in Tarbela that the Americans are coming back, and former mayor Firdous Khan said he would welcome them.

He said he admired the American engineers who helped build the dam for their ability to get things done without delay, and without demanding a bribe.

But decades later, surveying his town's potholed streets, its archaic sewer system and its vast population of unemployed young men, Khan's mind turns to regret: "I just wish they had stayed."
Posted by Steve Douglass at 7:55 AM No comments: Links to this post