Almost lost in the hoopla celebrating the 40th anniversary of the first human landing on the Moon is the fact that astronauts and cosmonauts are at work on the International Space Station - together.

On that summer night in 1969, Neil Armstrong and Buzz Aldrin's steps on the Moon marked the finish line for the Cold War space race. Kennedy's promise had been kept, and the U.S. had won. There wasn't a question of partnership in those days.

Seven astronauts took off last Wednesday in the space shuttle Endeavour from the same launch pad that sent Armstrong, Aldrin and command module pilot Michael Collins toward their rendezvous with history in and over the lunar Sea of Tranquility. Some of the others in orbit today lifted off in Russian Soyuz capsules from the same launch pad in Kazakhstan where Yuri Gagarin started the human adventure in space on April 12, 1961.

The combined shuttle and station crews have been busy since Endeavour docked, finishing up the Japanese laboratory module and getting the station ready for the day when space shuttles are no longer flying. Overall there are 13 space travelers on the ISS right now -- two each from Russia and Canada, one from Japan, one from Belgium and nine from the U.S. For the first time, all of the station's partner agencies are represented on board.

Every day before the station crew goes to bed the controllers on the ground take turns giving them any last-minute instructions or receiving final reports from orbit. The call signs of that daily tagup -- passed from west to east -- are literally a trip around the world.

It starts in Houston, which was the the first word spoken from the Moon. From there it goes to Huntsville, Ala., where many of the science payloads are controlled; to Munich, where Europe's Columbus lab is managed; to Moscow; to Tsukuba, Japan, home of the Kibo ground crew. Sometimes there are calls to St. Hubert, Quebec, where the Canadian-built robotics are monitored, and Toulouse, France, flight control center for the European Space Agency's Automated Transfer Vehicle.

Yesterday Brian Smith, the first-shift lead ISS flight director in Houston, commented on the Apollo 11 landing as he stopped by to brief reporters on the day's events.

'Back when we landed on the Moon, it was pretty much two countries involved and obviously they weren't working together,' he told the handful of journalists following the mission, a tiny fraction of the press mob that covered NASA operations 40 years ago. 'One was trying to beat the other in accomplishments for manned space. And now you look at what happens when the countries team up together. We can do so much more and set an example for the rest of the world on exactly how much you can accomplish when you work together. And we can serve as a model for countries working together in a peaceful and a productive way.'

The Apollo program was one of the premier feats in the history of engineering. So, in my view, is the assembly on orbit of the ISS, but with a tremendous dose of diplomacy added in. You could say that the lunar landings were really an act of war, albeit a cold one, in the sense Clausewitz meant when he said war is a continuation of politics by other means. Assembling the ISS is the opposite of that, and Brian Smith hit the nail right on the head about it.

With the space race won, the U.S. quickly retreated from the Moon. It's far from certain that NASA will go back there anytime soon, given other priorities on the U.S. agenda today. But it will be harder to retreat from the ISS. Humans have lived there continuously for almost nine years now, and are only beginning to reap the engineering lessons and scientific results it was built to deliver.

Certainly that is not to discount the courage and imagination that went into Apollo, or to ignore the foundation it set for future spaceflight. In just one example, the astronauts spacewalking outside the station today learned their stuff underwater. In doing so they were applying a training technique that Aldrin -- a scuba enthusiast -- proposed after Gemini-astronaut Ed White and other early spacewalker had trouble maneuvering in zero-g.

'Everything we've accomplished with the space station is built upon what was done in the Mercury, Gemini and Apollo programs, and even the Apollo-Soyuz Test Program following that and then Skylab,' Smith said. 'We built on that experience.'

The consoles at Mission Control Center - Houston and its counterpart in the Moscow suburbs are filled with idealistic young engineers like Smith. They have a different life experience than their predecessors, and they are finding important new ways to work together 'in a peaceful and productive way.'

'I wasn't born yet when we landed on the Moon, so I don't have a first-hand recollection and I can't tell you what I was feeling at the time or what my memories were,' Smith said in response to a question from Gina Sunseri of ABC News. 'They don't exist.'

Posted by Steve Douglass at 8:03 PM No comments: Links to this post

I was a witness to this magnificent event.

Looking back - we were really very privileged to live in that thin slice of history where we changed how man looks at himself and what he might become and where he might go. 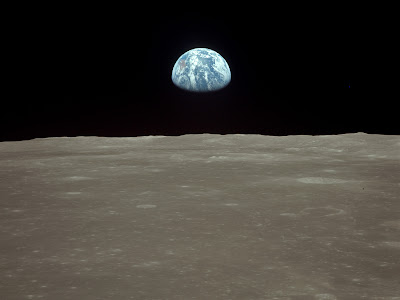 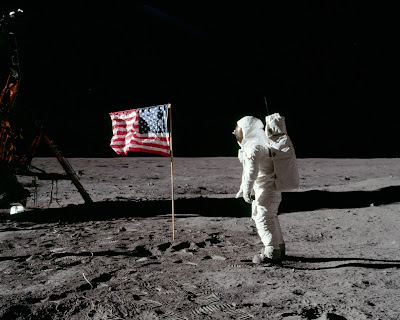 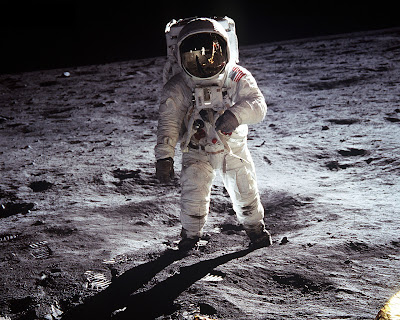 Posted by Steve Douglass at 4:21 PM No comments: Links to this post