Lockheed Martin to Build Airship for DARPA: "Unmanned airship will have Raytheon-developed active electronically scanned arrays built into its structure"

Posted by Steve Douglass at 4:16 PM No comments: Links to this post 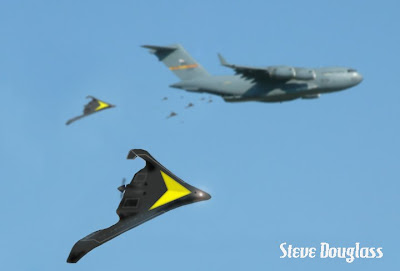 Northrop Grumman acquires KillerBee UAV line: "Renamed the Bat, the blended wing-body UAV will be offered in sizes ranging from 6.5 feet to 33.2 feet in wingspan"

Posted by Steve Douglass at 4:16 PM No comments: Links to this post

No one dies in unmanned UAV crash.

By KEITH ROGERS
LAS VEGAS REVIEW-JOURNAL
An unmanned MQ-1B Predator spy plane crashed today on public land 1 and one-half miles west of Creech Air Force Base during a routine training mission, a spokeswoman for the 432nd Wing at the base said.

No injuries or private property damage were reported.

Base personnel responded to the crash site to work with local officials to secure the wreckage of the $4 million aircraft.

The crash occurred 8 a.m. about 47 miles northwest of Las Vegas in a remote desert area managed by the Bureau of Land Management.

No military personnel or civilians were in the area at the time of the impact, said Capt. Brooke Brander, a spokeswoman for the 432nd Wing.

“We’re still securing the site and picking up the pieces,” she said, adding that investigators will determine what caused the aircraft to go down and the amount of damage it sustained.

Editor's note: Although no humans died in the crash, three computers onboard were destroyed. They are survived by two IBM PCs (running hacked copies of Vista) and a Commodore 64.

The aircraft was being controlled remotely from a ground station at Creech and was not armed with Hellfire missiles, Brander said.
Posted by Steve Douglass at 3:42 PM No comments: Links to this post

NEW YORK (CNN) -- After a YouTube video showed panicked New Yorkers scrambling as a Boeing 747 flew frighteningly close to the lower Manhattan skyline, a former Homeland Security adviser questioned whether the man who approved the flyby should remain in his White House office.

Fran Townsend, who advised President George W. Bush for more than three years, called the move "crass insensitivity" in the wake of 9/11.

"I'd call this felony stupidity. This is probably not the right job for Mr. Caldera to be in if he didn't understand the likely reaction of New Yorkers, of the mayor," Townsend said Tuesday on CNN's "American Morning."

"Last week, I approved a mission over New York. I take responsibility for that decision," Caldera said. "While federal authorities took the proper steps to notify state and local authorities in New York and New Jersey, it's clear that the mission created confusion and disruption."

The Federal Aviation Administration said the aircraft, which functions as Air Force One when the president is aboard, was taking part in a classified, government-sanctioned photo shoot.

On Tuesday Sen. John McCain wrote a letter to Defense Secretary Robert Gates saying he was "profoundly disturbed" by the fly-over "against the backdrop of September 11."

"The supposed mission represents a fundamentally unsound exercise in military judgment and may have constituted an inappropriate use of Department of Defense resources," McCain, a ranking member of the Senate's Armed Services Committee wrote in the letter.

He requested an investigation into the cost of the flyover.

An Air Force source told CNN Tuesday that the White House Military Office planned a photo shoot over various Washington monuments next week but that it's now been cancelled.

An angry Mayor Michael Bloomberg said it "defies the imagination" that an agency would schedule the photo shoot so near the site of the September 11, 2001, attacks on the World Trade Center.

The YouTube video shows dozens of people standing in a parking lot, watching the plane approach. As it nears, they begin to run. Someone unleashes an expletive. "Run, run!" says one person. "Oh my God," cries another.

"The president was furious about it," one of the officials said.

On Tuesday, Obama told reporters, "It was a mistake. It was something we found out about along with all of you. And it will not happen again."

Obama has ordered a review into "why that decision was made and to ensure that it never happens again," White House press secretary Robert Gibbs said Tuesday. Jim Messina, a deputy chief of staff, will lead the effort.

Bloomberg said he, too, was perturbed.

"I'm annoyed -- furious is a better word -- that I wasn't told," he said, calling the FAA's decision to withhold details about the flight "ridiculous" and "poor judgment."

"Why the Defense Department wanted to do a photo op right around the site of the World Trade Center defies the imagination," he said. "Had we known, I would have asked them not to."

Linda Garcia-Rose, a social worker who counsels post-traumatic stress disorder patients in an office three blocks from where the World Trade Center stood, called the flight an "absolute travesty." Watch the White House respond to questions about the scare »

"There was no warning. It looked like the plane was about to come into us," she said. "I'm a therapist, and I actually had a panic attack."

Garcia-Rose, who works with nearly two dozen patients ages 15 to 47, said she was inundated with phone calls from patients.

"They're traumatized. They're asking 'How could this happen?' They're nervous. Their anxiety levels are high," she said. iReport.com: Tell us what you think

Garcia-Rose said she is considering filing a class-action suit against the government for sanctioning the plane's unannounced flight.

"I believe the government has done something really wrong," she said.

Capt. Anna Carpenter of Andrews Air Force Base in Maryland said local law enforcement agencies and the FAA had been given notice of the exercise.

New York Police Deputy Commissioner Paul J. Browne said the department had been alerted about the flight "with directives to local authorities not to disclose information about it."

Forget gremlins on the wing - they have nothing on this guy.

Watch Wing Walker on CollegeHumor
Posted by Steve Douglass at 7:20 AM No comments: Links to this post

White House apologizes for botched photo op: "NEW YORK — It was supposed to be a photo op that captured images of an Air Force One plane with a majestic Statue of Liberty in the background. Instead, it turned into a public relations nightmare that led to recriminations from the president and mayor and prompted thousands other to ask, ‘What were they thinking?’"

Posted by Steve Douglass at 7:09 AM No comments: Links to this post