The Real Reason Russia Is In Georgia? 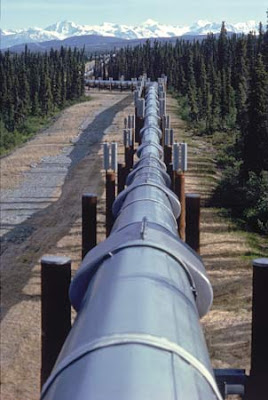 Toby Odone, a BP spokesman, said the 150,000 barrels a day pipeline from Baku to Supsa on the Georgian Black Sea had been closed as a “security precaution.”

A natural gas pipeline linking a BP-operated field offshore Azerbaijan with Georgia and Turkey has also been closed.

Exports through the Baku-Tbilisi-Ceyhan pipeline to the Turkish Mediterranean, the main artery for exports from BP’s huge Azeri field offshore Azerbaijan, halted last week after an explosion on the Turkish section of the pipeline. The pipeline carries 850,000 barrels a day

Kurdish separatists have claimed responsibility for the accident in Turkey.

Mr Odone said a fire at the site was extinguished on Monday, but the area was still “too hot” for repair work to begin and it was unclear when deliveries to the Ceyhan would recommence.

Mr Odone said “very small volumes of Azeri oil, less than 100,000 barrels a day,” are now being exported via railways across the Caucasus and a pipeline to Russia.

Mr Odone said BP was unaware of any attacks on oil and gas pipelines in Georgia despite Georgian claims that Russian warplanes had bombed the pipelines.

“We always knew the region was unstable and we will just have to wait and see what happens,” he said

Lado Gurgenidze, the Georgian prime minister, told the FT on Tuesday, that Georgian railways and oil ports and Black Sea ports were in working order.

Karim Massimov, the prime minister of Kazakhstan, said “no harmful action had been taken at Batumi” , a Georgian port owned by KazMunaigas, the Kazakh state oil company. However, Mr Massimov ordered a halt to exports across the Caucasus to Batumi on Monday.

The International Energy Agency warned on Tuesday that the conflict in Georgia threatens the strategic energy export corridor linking the Caspian and central Asia with western oil and gas markets.

“Recent escalation in the military engagement between Russia and Georgia poses a threat to certain key oil and gas pipelines which transit Georgia, the IEA said in a report issued shortly before Russia declared a ceasefire in Georgia.

The pipelines, built by foreign consortia with strong political backing from the US, have eased Russia’s stranglehold over oil and gas exports from the landlocked Caspian region
Posted by Steve Douglass at 5:30 AM